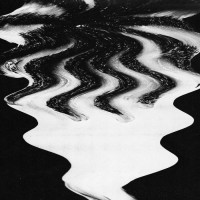 One of my favorite discoveries last year was Cincinnati punk trio, Leggy. The psychedelic, riff-y punk gem Nice Try of early 2015 has been followed up with a new trip down the wallowing, grungy, static covered rabbit hole: Dang.

â€œBruisesâ€ makes the first splash: vocals drowning in waves of hissing, distorted surf punk, the auditory version of trying to see a punky beach party through a snowy, salt and peppered screen of an analogue television found at a Nirvana fanâ€™s garage sale. â€œEven Lanaâ€ is like an American love letter born to die for: extra bubbly guitars and vocals donâ€™t make me sad, and donâ€™t make me cry, but stand out like a full flavored diet Mountain Dew; while the crinkly, bold bass tastes like Pepsi cola, and the drums crash and thump like gods and monsters.

The punkest chorus comes in â€œBackyard,â€ â€œLike a baby smoking cigarettes, or a lash against the cornea, you are abrasive and offensive, I really gotta stop rewarding yaâ€™.â€ The vicious sounds coming out of dreamy vocals is such a wonderful, powerful contrast, similar to those of Mitskiâ€™s brand of songbird brutality. The 9 minute EP is ended with â€œWaisted,â€ inexcusable lamenting backed by major secret agent bass bumping.

Dang is a dirtier sounding Leggy, adding more road rash and cigarette burns to a leather jacket running through decades of music styles. Leggy's history has ensured the listener of a good trip every time you put their music in your ears, and DangÂ is no exception, just another step towards this new wave of garage-grunge royalty.