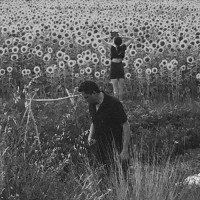 Jesu have always been one of the most badass, underrated acts around. Hearing them shift things up with Sun Kil Moon (Mark Kozelek) is quite an experience given how quaint and unconventional the latter's always been to me. His wordspeak emerges here as a recitation of his diary over the last couple years -- all stitched onto Jesu's layers of hardcore, post-hardcore, experimental and most notably, sludge (for fans of Floor and Torche). This self-titled collab's a decent piece of art (if you're into things like Self Defense Family) being expressed in a way that's best described as beautiful chaos.

There are a few surprise guest spots from Will Oldham to Isaac Brook (Modest Mouse) helping drive the record as well to show how these acts appeal to their fellow peers. Everyone wants a piece. The openers "Good Morning My Love" and "Carondelet" dictate the pace early on, unwinding a lot of the frustration and agony of Kozelek's words. The ambiance actually feels a lot like what Touche Amore and La Dispute would create when crossed over. Loads of tragedy. Most tracks though use an electro-pop/synth base as the wheel with songs like "America's Most Wanted" and "A Song of Shadows" dialling things back a notch and in doing so, slows the record's heartbeat down to let the dark and depressive nature of Kozelek permeate. I admit it feels like Jesu's in the background too much and should have stepped out more but hey, it still works.Â

There are a lot of real-life experiences and pop-culture references on tap that help you connect, case in point, the acoustic burner in "Fragile" -- but as these songs dig into you, you really feel the emotional heft both acts convey. The album's trying at times, a bit too long but trudge on and give it a chance. There's something very different here that's worth the time.