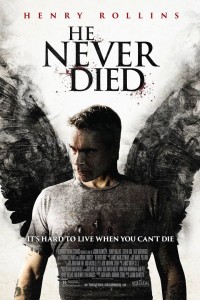 After what seemed like a buildup on par with Guns N Rosesâ€™ release Chinese Democracy, Henry Rollinsâ€™ first film in a starring role was released in late 2015. He Never Died features Henry Rollins in the role of Jack. The film focuses on Jack as he interacts with the world through a daily routine and what happens when that world interrupts that routine. I have done my best to leave any major plot elements, not found in trailers, out of this review. That being said, you read the following paragraphs at your own risk.

Letâ€™s deal with the biggest question that is likely on everyone mind at this point, can Henry Rollins act well enough to carry a feature film in the lead role? The short answer is yes. Certainly weâ€™ve all seen Rollins in supporting roles or playing minor characters. Heâ€™s always been entertaining in these roles a cop or a minor variation thereof, a hockey coach, some variation on a criminal and similar roles. Here he plays Jack, who is really Cain from the Bible, who has taken on a ritualistic lifestyle in order to keep from reverting back to a violent cannibal. This is where you can see that Rollins does have some acting chops; this isnâ€™t to say heâ€™s the next Brando. But, he certainly is able to convince you he has no interest in others or social skills whatsoever. If youâ€™ve ever had the chance to meet him after a talking show, you know that Rollins is always warm and does his best to engage everyone with what time he has available. One great success is how he reacts during acts of violence and immediately after them. He never falls victim to what Iâ€™m going to call â€œVan Damme Faceâ€ but rather treats the violence exactly how youâ€™d expect someone who had been killing so long it appears in Biblical mythology would â€¦ with a reaction that speaks to how boring it has become and awareness of how tired theyâ€™ve become of it. Rollins biggest success is that he doesnâ€™t overact â€¦ which coming into this film was my biggest concern. As anyone who has seen his talking shows knows, he has a flair for the dramatic and he avoids that here. He succeeds in making me forget Iâ€™m watching Henry Rollins in a movie and actually gets me to focus on the character.

Jason Krawczyk wrote and directed this film, and while he has two other films under his belt. Itâ€™s sufficed to say this is the most attention anything heâ€™s released has gotten up to this point. And with good reason, he took the action/suspense comedy of his previous efforts and took them to a new level here. In terms of the writing, the dialogue can be a bit off putting at times, not in a bad way. More so in the sense that you donâ€™t feel like this is a normal way for people to converse with one another â€¦ which given the main character is bored of existence and human interaction due to multiple millennia spent on Earth is exactly what you should be thinking. Krawczyk also succeeds in terms of his directing abilities, the film carries a consistent feel and the cinematography while never poorly lit carries just a enough darkness to even make the light hearted moments keep the film from devolving into a comedy. If the ultimate goal of a writer/director is to write a story and then capture it on film, Krawczyk succeeds does strikingly well in that regard. The one fault that I will give him is there are moments when Jackâ€™s character lets out a demonic scream of sorts, it comes off sounding like an angry bull. While not taking away from the overall quality of the film, given Rollins known ability for yelling and screaming into a microphone it may have been an audio effect that was not needed to move the story along.

Another bright spot, albeit in a much small role, comes from Steven Ogg who plays a mob boss named Alex and who most people are likely to recognize as Trevor from the fifth installment in the Grand Theft Auto series. He carries his maniacal voice acting over to the screen in this role and it pays off in dividends, as it provides a great on screen foil to Jackâ€™s cold calculated and isolated nature. Alex by comparison comes off as warm and inviting before becoming absolutely terrifying.

All in all, this is a good movie. Itâ€™s not going to change the film industry, nor is Henry Rollins about to become the premier over fifty male actor of the second half of this decade. But, this is a fun movie and it does this without being a stupid movie. Perhaps nothing speaks to the successes of all parties involved more than the fact there are talks of a miniseries delving into Jackâ€™s backstory more, and with Rollins slated to play Jack and Krawczyk signed on to direct itâ€™s a series I would definitely make it a point to watch.Â