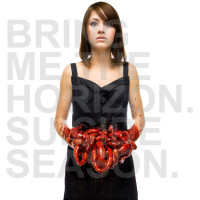 Bring Me the Horizon

Bring me the Horizon's Suicide Season found the band at the height of their skills. Vocalist Oliver Sykes develops an excellent scream here, as opposed to on 2006's Count Your Blessings where you could literally hear him destroying his voice. Meanwhile Lee Malia's distinctively beefy guitars chug through the mix. Sure there are some not as serious tracks ("Death Breath comes to mind, it's literally about vampires") but among them are some truly aggressive metalcore jams that will go down as some of the genre's best, "Diamonds Aren't Forever", "Chelsea Smile" and "Sleep With One Eye Open" come to mind.

That being said, the album has one major flaw: It's closing track. The album's title track falls a short. It's a whole 8 minutes but feels like it could end about four times. While well written, it would be perfect if it was half the length. The band might be trying to expand on their skillset, but they just don't have the skills to pull off the entire running time. It was a good try, but it just doesn't work.

In short, you can continue with your stereotypes and judgement, but at the end of the day this is still one of the best metalcore albums since the genre's creation.