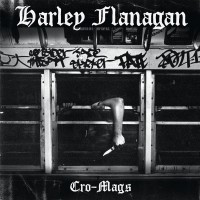 It should be self evident, but the focal point of Harley Flanaganâ€™s new album, cheekily titled Cro-Mags, is conflict with former bandmembers. And without fueling any flames, it should be obvious which particular former bandmate is the subject of the brunt of the attack. Though, to be fair, Flanagan, during his onslaught, takes a couple shots at other targets, too.

At just 12 tracks and 24 minutes, Cro-Mags feels like a fistfight. Unlike some later day Cro-Mag albums, or Fanagan solo records, thereâ€™s very little of the mid-period heavy-metal theatrics. Instead, each of the tracks here get in, bust the place up, and get out. It has been said about previous releases before, but moreso than ever, this album holds the truest to the spirit of the famed Age of Quarrel.

Flanagan has cited Lemmy Kilmister as an influence, and just like pretty much every Motorhead album, these tracks pretty much all slam along at top speed, blasting out at ten. When he does pause, ever so briefly, every once in a while, Flanaganâ€™s true skill becomes evident. Depending on who you ask, Flanagan created, or was a huge part of creating, the New York Hardcore sound. And if you ask me, pretty much every New York Hardcore band springs from the sound of Age of Quarrel.

Yet, with so many imitators, there seems to be that extra snap missing. But why? Cro-Mags in its tight 24 minutes, explains it. Flanagan, who actually was a part of both the early UK and USA punk scene, has always maintained that hardcore punk is hardcore punk, and not its own entity. On Cro-Mags, Flanagan keeps that inherent rock swing at the base of his sound. Sure, it might be obscured with all his volume and anger, but underneath the rage here is kind of the same spirit that drove guys like Jerry Lee Lewis (the Damned, too). So, when Flanagan does pull on the reigns and holds back those riffs, it sounds like the song is bucking to go forward, and when it does, it hits that much harder. So many bands following in the wake of the Cro-Mags used pacing and punk-chugging as a sort of mechanical devise to add a sort of texture to their song. Flanagan doesnâ€™t to that. When Flanagan really digs into those swinging riffs, thereâ€™s nothing mechanical about it, itâ€™s all soul- a really, really pissed off soul, but soul none-the-less.

And certainly, Flanaganâ€™s issues with his former bandmates is at the forefront, including an instrumental track that includes what appears to be a soundclip taken from one of Harleyâ€™s moreâ€¦ well â€œHarleyâ€ escapades. Whoâ€™s to say whoâ€™s right and who is wrong and who the bad actor is? I canâ€™t say. But, with all the bile here, itâ€™s clear that Harley believes in what heâ€™s doing. You donâ€™t make music this compact and this fiery through simulation.

Harley is a maniac- thereâ€™s no other way to say it. It seems his life has been filed with conflict and turmoil. As you scan the news and come across his conflicts, there are times, you wish you could say, â€œHarley, if you just calm down a little, things could be so much more steady and youâ€™d have much less conflict!â€ But, with an album like Cro-Mags the very title of which is a taunt, you donâ€™t get art like this without there being some sort of mortal clash. Honestly, as this LP shows, it may very well be worth the price.