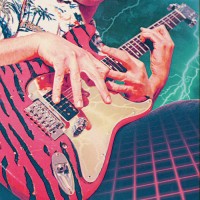 Soda Bomb. Joyce Manor. State Lines. Oso Oso. Slackers. Indie. Power pop-punk. Rozwell Kid, welcome to the club. Not that they needed any formal introduction. They've been making catchy, infectious punk bangers for some time now and definitely feels like one of the best in the genre at the moment. Good Graphics is an EP that really swells what Too Shabby did in 2014 and is an earmark that I admit I should have noted last year.

Devin Donnelly's bass drives so much of the album. In just six tracks, you get a snapshot of where they came from and where they directly heading. From the poppy charmer of "Baby's First Sideburns" to the guitar-aggressive "Stunt Kite", they tow the line between catchy and heavy so well. Their music's so tongue-in-cheek, dynamic yet full of conviction. What I absolutely love here is that there's no filler at all. When they tinker on the alt. grunge lines of "Hummus Vacuum" you see even more dimensions to a band that even has some surfer vibe to them. Case in point, "Angus Soundtrack Deep Cut". If you wade through, you'll find they're more personal than cheeky and I think that's a hidden attribute that adds a degree of character that'll take them a long way forward. Versatile and highly recommended. Think of Weezer, just drugged up and angry as fuck. In a good way.

Si Dou Le: A Dream In Our Hearts