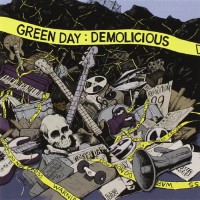 Green Day have done it all, played it all, and seen it all. With eleven studio albums, a Broadway musical, and an acceptance into the the Rock and Roll Hall of Fame on their first eligible year running, is just a few of the California band's accomplishments. So when they decided to release a demo album exclusively for Record Store Day, it came by no surprise to the fans.

The most shocking thing about Demolicious in all honesty, is the fact that a few of the demos are even better than the studio versions. Perhaps the authentic, raw sound made it all sound more like natural Green Day, rather than the cleaned up and edited Green Day that many have grown to oppose.

The album itself withholds one previously unreleased track, "State of Shock", that is catchy and slightly resembling of surf rock, which is a genre the band has never really explored. Nothing else on the album was new, so the track had a lot of weight on its shoulders right out of the gate. Unfortunately, the album, even with the new addition, just felt like filler: something to give the fans to chew on while the band takes its time to reconvene, and "State of Shock" proves to not be nearly enough to keep the fans busy.

The acoustic demo of the song, "Stay The Night", however, is done beautifully with Billie Joe Armstrong (frontman) all alone, in a soft, raspy voice with his acoustic guitar in a tone that almost sounds like a lullaby. It felt like an entirely different song than what was released prior on Uno!, demonstrating how the band had really gone through an extensive process to create every song's final product.

All in all, Demolicious is hardly anything new. It lacks the excitement of listening to a record for the first time, and in fact, almost felt like a step backward into the raw, uncut, beginnings of the songs we all already grew to know and love. Unfortunately for Green Day, this is clearly no Dookie or American Idiot, but for what it was, it was well done, and we can only hope brand new music will soon be on its way.