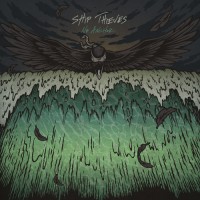 Itâ€™s damn near impossible to write a standalone review of a Chris Wollard project without immediately stacking it up against his past work. Whether you favor Caution, In A Million Pieces,Â No Division, etc.... every fan has got a different standard a new release must measure up to. Having a hand in inspiring an entire generation of bearded punkers with Hot Water Music, Wollardâ€™s got an awful big reputation to uphold. On top of that, his solo(-ish) work outside the seminal Gainesville act has varied greatly in both style and audience reaction. Would the cemented band lineup return to the folksy rambling of 2009â€™s Chris Wollard and the Ship Thieves? Would they stay the route of 2012â€™s decidedly more Americana full-band sound of Canyons? As it turns out, they did neither. No Anchor is a triumphant return to his roots: itâ€™s heavy, rocking and cohesive, with all the traits of what made Hot Water Music a modern punk touchstone.

Like The Draftâ€™s In A Million Pieces before it, itâ€™s hard not to listen to this as a Chuck Ragan-free Hot Water Music record. But the absence of Jason Black and George Rebelo gives No Anchor a unique rhythm. With a few listens, it becomes clear that the Ship Thieves are their own musical entity. Unlike earlier HWM, where Rebelo and Blackâ€™s tightened pulse would occasionally take over steering the ship, these No Anchor tracks tend to feel unified behind Wollardâ€™s trademark guitar work. Simple, but effective lead lines laced over primarily minor key distorted progressions make up the bulk of the album. Itâ€™s in line with everything heâ€™s done before, but with relatively new bandmates (at least to this style), it feels fresh.

Wollard continues to pay homage to punk-friendly writers in his lyrics, tipping his cap to both Vonnegut and Bukowski in two of the albumâ€™s biggest hooks. â€œMiddle Manâ€ builds off the rousing â€œSo it goesâ€ of its chorus, and â€œBorn to Thisâ€ draws a straight line back to the namesake of the Bukowski documentary. His words have always toed the line of generic clichÃ©s, but his growling voice continues to give weight and meaning to simplistic lines. That holler hasnâ€™t lost a step, either. On â€œSomething Is Missing,â€ he howls with a vengeance like weâ€™ve never heard from him before. â€œRutsâ€ is a showcase of his spiteful bite and an absolute reminder of why he remains one of punkâ€™s most appropriated voices.

With Hot Water Music remaining awfully quiet since 2012â€™s Exister and the Draft (despite the occasional tour) doing the same, this record feels a little more important than it might actually be. It doesnâ€™t reinvent the wheel, but itâ€™s an impressive take on a sound that many have been desperately seeking. Thereâ€™s a reason Wollard and company are still heralded as the â€œorgcoreâ€ standard. No one can replicate that sound quite like they can, and No Anchor is a seamless new take.Â