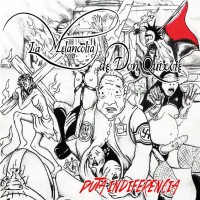 La Melancolia de Don Quixote's Puta Indiferencia is a true anarcho record, from self-conscience existence to global unity awareness. The band sings in Spanish and they are heavily influence by anarcho-punk and d-beat. The lyrics are shouted or screamed and the the songs are very energetic. THe production is fairly low-fi, with the drums pushed into the front and the guitar buzzes in the background. Still, on tracks like "Degolladas," the band tries different styles. They go from d-beat charge to a death rock riff and an almost goth passage. The songs may be long, but they have multiple parts.

"Depression" is about the decision to own a right of ending one's life. "Rotting Corpses" is a true horror punk song about how to roam earth and surviving on human flesh. "Sed" is a lustful experience through sexual freedom. The rest of the album is a mix of uncontrollable anger towards an everyday battle with humanity.Â The album is interesting all the way through and shows why this band is large on their local scene.