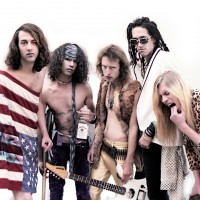 Penetration Moon was the short-lived side project helmed by Blag Dahlia and Sgt. Saltpeter of the Dwarves in the early â€˜90s. The central idea behind the project was that since Glam Rock was so popular in the late 80s and early 90s, Blag and his friends wanted to start their own glam rock band- but in the style that they thought was the â€œtrueâ€ glam rock. Itâ€™s telling that while that recipe makes one think Blag and crew will kick out a load of Bowie, T-Rex, and Sweet covers, the bandâ€™s vision of glam is to cover GG Allin, Dead Boys, and The Weirdoes. (Though, to be fair, there is also a Johnny Thunders cover).

During their run, the band only released a two song 7-inch. Now, this archival release compiles all or almost all of the bandâ€™s recordings, which were recorded in the early 90s but only mixed now.

Despite the glam angle, thereâ€™s almost nothing pretty here. The band revels in the grim and grit of early garage rock as well as the grimier side of early punk. Johnnny Oâ€™Keefeâ€™s â€œThe Wild Oneâ€ is bathed in a Pagans coat of tar and sandpaper, resulting in a wild, loose tune that sits somewhere between CBGBâ€™s and a Montana Road House. Perhaps the most Dwarves-ish track is the bandâ€™s take on the Dead Boysâ€™ classic, â€œCaught with the Meat in your Mouth.â€ Like the Dwarves and Dead Boys, Penetration Moon plays the camp and serious angle of decadence and destruction at the same time. Are they really seething with that much hatred or do they think its funny that some people really are that shattered? Honestly, itâ€™s doubtful that even the band could answer that, either.

Likewise, the trick works backwards. â€œLife of Crimeâ€ is a bona-fide west coast punk classic, but as the band slows it down slightly and rolls in the tuneâ€™s snakeish riff, the connection between punk and hard blues is once again apparent. Once again, it all comes down to tempo. But, even as the band is giving a history lesson through performance, they canâ€™t help but interject some screwballs into the mix, even if they are ever so slight. Listen closely and youâ€™ll catch an NWA reference as well as a proto-Dwarves line.

Burger Records does a nice job of sprucing up this set and preserving it for the future. Simply due to the bandâ€™s large number of covers and, perhaps similarly to the Dwarves, being slightly out of time with the trends, the band was never bound for rock arenas. But, even though they never achieved financial or critical acclaim, this release certainly is a valuable addition to the Dwarves storyâ€¦ how many other gems are buried down there?