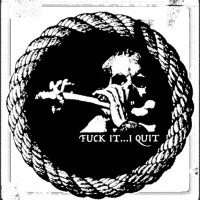 Fuck It. I Quit

Fuck It. I Quit is, as their Facebook page aptly puts it, a new band from old guys. Most notably, the band is fronted by Tim Shaw from Ensign, a New Jersey band of considerable weight for many years. Iâ€™m not sure what other pedigrees the rest of the band come from, but the past isnâ€™t all that much necessary here anyway. FIIQ embrace a sound and aesthetic that is far more gritty and grimy than many of their current New Jersey hardcore counterparts. Their demo, which is far closer to a proper full length given its twelve-song recording, was recently posted to the bandâ€™s Bandcamp site and offered on a donation basis.

From the first song itâ€™s apparent that FIIQ seek to antagonize their listeners. The vocals are shrouded behind heavy distortion throughout. The decision here to apply effects to the vocals is somewhat of an conflict for me. It certainly distances Tim from his vocal stylings in Ensign and parallels the noisier side of the music. However, I do think it detracts from the recording at times. I found myself wishing for a more direct sound vocally for a few reasons. Most significantly the effects pulled the vocals back into the music too. There were times when the effect simply made it hard to hear the vocals apart from the guitars. And I couldnâ€™t help but wishing I could better make out what Tim was actually saying.

And I lament that because itâ€™s clear that FIIQ has a socio-political message. Tim Shaw has long been a socially conscious front man and that aspect for him certainly hasnâ€™t changed here with FIIQ. And I mean, just think about their name for moment. But with songs like â€œAfter the Wars,â€ â€œHomophobic PxOxSxâ€ and â€œdeath.fear.sufferingâ€ I really sought to get to the lyrical content. But alas, that wasnâ€™t to be.


Musically, the band is all about speed, grit and noise. Every song clocks in at under two minutes and some last no longer than even thirty seconds. And yet, the songs blast in and blast out with great consistency. Overall, the song structures are appealing because they are purposefully charged with urgency and donâ€™t ever really stop until the song is over. For me, the strongest track is â€œYouâ€™re Pathetic,â€ particularly for the more melodic guitar work throughout.

Fuck It. I Quit didnâ€™t really make it all that clear what their plan is show-wise, although they have a few booked in New Jersey for the near future. At twelve songs available on a donation basis, it would be foolish of me not to recommend this release. Itâ€™s noisy, itâ€™s aggressive, and itâ€™s politically antagonistic. And so itâ€™s punk played by old guys who still have something to say.