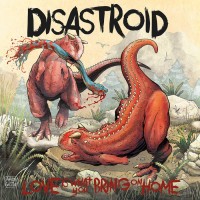 Disastroid is a trio from San Francisco that has a sound thatâ€™s hard to pin down. Imagine if The Minutemen listened to a bunch of Black Sabbath and put their albums out on Amphetamine Reptile. Or something like that. There are elements of stoner metal and punk and several other things that you canâ€™t quite put your finger on. Love is What You Bring on Home is Disastroidâ€™s new two-song 7-inch record. Itâ€™s the bandâ€™s sixth self-released recording, three of which are full lengths. It features some of the best and most vivid cover art in recent memory. Itâ€™s a dinosaur retrieving dinner for its mate. Dinner happens to be the head and neck of different dinosaur. Or maybe a giant snake. Either way itâ€™s pretty cool.

The A-side is the two minute title track. It almost feels like an extremely deranged soul or R&B song. Itâ€™s angular and jerky, but has enough of a hook to hold it together. â€œLove is What You Bring on Homeâ€ can be a bit frantic, but thereâ€™s also plenty of understated melody. â€œGadaboutâ€ is the five minute B-side, and the more ambitious of the two tracks. As its title suggests, the song goes all over the place. Spastic rhythms and shifting time signatures keep it from bogging down, and also keep the listener from getting too comfortable. These guys make challenging music, and itâ€™s not going to be for everyone. If youâ€™re the adventurous type, you should probably check out Disastroidâ€™s Love is What You Bring on Home.

The Red Owls: Do You Feel Any Better? [EP]