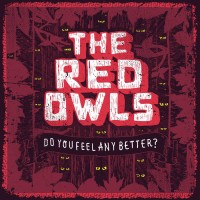 The Red Owls is a band that consists of members of bands The Ataris, Anadevine, and Nightmares For The Week. The band formed in 2015 and they just put out their first release Do You Feel Any Better? in October of the same year. Just by listening to the four tracks on this EP you can hear that The Red Owls have already found the direction they will most likely take with their future releases. The band clearly has aimed to be known as an updated melodic-hardcore act and it's safe to say that they are on their way to doing that.

The songs that exemplify the kind of sound they are going for are â€œParty Linesâ€ and â€œBad Advice.â€ For the track â€œParty Lines,â€ the band just jumps right into it. No intro needed. The lead singer starts his higher-pitched, melodic vocals; the gravely guitars and intense drumming begin together immediately. During the verses, while the guitars switch to a fast and crunchy palm mute, the lead vocalist is joined by very high harmonies coming from the back up singers. And as you probably can tell just by this trackâ€™s title, it is the more politically driven song of the bunch with lyrics that attack the notion of compromise as really â€œanother way of giving into my partial love of giving the fight.â€

Do You Feel Any Better? is a solid foundational first release, but The Red Owls did play it pretty safe sound-wise here. They still need to push themselves a little more and find their unique sound because, though this is not by any means a bad release, we have heard this sort of pop-y melodic-hardcore before. So it will be interesting to see what they do next and to see if they plan to expand their sound more. Again, itâ€™s a descent start. For those of you who are into bands like Lagwagon, Good Riddance, and even Bad Religionâ€™s later material, you may want to give this EP a listen.

You can check this EP out here.Â

Disastroid: Love is What You Bring on Home [7-inch]