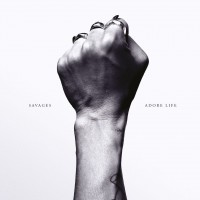 Adore Life is more mildly disappointing than actually disappointing, like getting a Werther's from your nice grandma instead of a Rolo: good, just...not as good as it could've been. Especially comparing it to Savages' brilliant 2013 debut Silence Yourself, a collection put together almost perfectly in terms of structure, length, etc. Even clocking in at 40 minutes, Adore Life feels weirdly stunted, like it's just not quite THERE as a whole album. Song by song, the tracks are often really good and even great of course: the opening "The Answer" will go down as one of the best punk/rock songs of the year, a pummeling mass of a crunching riff combined with Jehnny Beth's immortal, charging vocals. But there's something amiss in some of the songs, like they're close to filler circling around the real classics, and that's a let down after such a build up.


Even then of course, the filler isn't bad, just not anything you couldn't pare down while making a playlist, like the danceable but vaguely empty "Evil". And then frustratingly the same sort of beat is used in "Surrender" but augmented with nasty industrial feedback and Siouxsie and the Banshees style keyboard work, pointing to an interesting, more rhythmic way forward for Savages (and Beth's voice, which stretches and shrinks on this wonderfully). But that kind of dance punk sound is also contrasted by the centerpiece of Adore Life, "Adore". Certain to be a live highlight, "Adore" is a powerful showcase for Gemma Thompson's atmospheric, incendiary guitar and Ayse Hassan's tension-filled bass that wonders and questions out loud, "I adore life. Do you adore life?" This is of course the thing about Savages: no major rock band is actively asking questions of its audience, and declaring so boldly their own version of memento mori. As the song builds to its climax, the drums ramping up, Beth's question/answer becomes a transcendent, angelic call, a rapture.


This of course sounds like a way more positive review than it is but I found a good 1/3 of the album frustrating (damn it "Adore" should've been the closer). Is any of it bad? Jesus, no. I don't think Savages could write a bad album at this point - their playing is always sharp, songwriting is strong (Beth's lyrics on jealousy and relationships are sung as manifestoes), and half the punk bands in the world could stand to learn from Savages' often jazzy dynamics. In truth though I think Adore Life would have been stronger as an EP, cutting off the fat and making something as lean and muscular as their songs. What we have though does suffice, and I can't wait to hear them trying out music for the weirdos who like to dance.