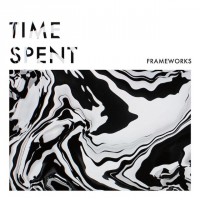 Frameworks are a band that would have ideally fit The Wave a few years ago with the likes of Touche Amore, La Dispute and Pianos Become The Teeth flying the flag. 2014's Loom seems to best represent their brand of screamo/post-hardcore but what I love about Time Spent is that it bridges the gap between their old sound and the steps forward from their last full-length.Â

It's just two tracks but two solid efforts. They come off more like Departures and The Saddest Landscape more than anything else. Luke Pate's caustic screams hit home hard on the opening "Worn Out" which deals with passion and following through on the things you love most in life. It starts off with a quiet, melodic build and then careens into you with a harsh post-hardcore bout of noise -- which sets the temp for the self-titled track. "Time Spent" is much more intense, screamo and guitar-driven and focuses on the past and present, comparing happiness then and now in one of their most introspective, well-written songs. Both tunes point in the right direction and that's one which leaves you eager for their next LP.