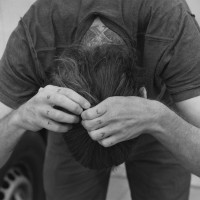 When it comes to music, the argument for quality over quantity always wins. But what about qualityÂ and quantity? For the last three years, Self Defense Family have been churning out releases at a dizzying pace. However, not a single one of them feels marginal.Â

Their most recent output (though a new EP comes out February 19th) is single â€œWhen the Barn Caves Inâ€ b/w â€œAlan.â€ It continues right where Juneâ€™s Heaven Is Earth left off. Youâ€™ll immediately recognize the post-hardcore backdrop to Patrick Kindlonâ€™s signature, strained vocals. Kindlon's yell used to be raspy and dark (and still is over at Drug Church HQ), but recently, he has not been able to hold back the audible downtempo defeat. And he gets into specifics; spitting vitriol at the mundane hand life has dealt. The most hypnotizing part of â€œWhen the Barn Caves Inâ€ is his repetition of â€œI have no portion controlâ€ taking cues from Heavenâ€™s â€œBurnt out. It leaked out. I learned.â€ It reflects on his inability to control himself but also acts as a metaphor for the population.

â€œAlanâ€â€”named after band member Alan HuckÂ apparently connecting most to the songâ€”features a present bass line and is lyrically as heartbreaking as anything theyâ€™ve ever done. â€œI have a hard time with new situationsâ€ is so brutally honest no other band would admit to it. For the record, there are hard times with making contacts, managing conflict, and with any sort of sex too.

The music is stark with this pair of songs credited to producer extraordinaire J. Robbins. But the sound is distinctly the bandâ€™s. Self Defense Family get rawer with every release. They are in a league of their own, but it seems to be a lonely place.Â

Travis Barker: Can I Say [Book]