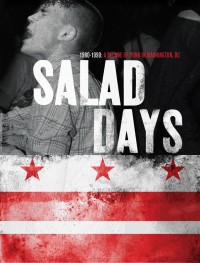 Scott Crawford's Salad Days, a documentary covering punk rock in Washington, D.C. primarily from 1980-1990, is predictable at best. I came to the film hoping to see coverage of some topics discussed less often than the early years of the Dischord Records scene. Maybe it would talk about bands not featured on the Dischord catalogue. Maybe it would avoid being yet another two-hour-long interview with Ian Mackaye. What I was really hoping for was more focus on the later part of the decade -- 1985 and onwards. Writers and filmmakers seem to skip over this period too often, ignoring Rites of Spring, Fugazi, Embrace, Soulside and Nation of Ulysses. I walked away bored and disappointed.

The story told is well worn -- a lot of musicians will talk about feeling bored by Fleetwood Mac and various classic rock icons of the late '70s, until in turn The Cramps, The Clash and the Bad Brains come to town and change everything. They'll explain how they started bands with no interest in profit or real musical talent, how all ages shows were important, how they self-released records and made fan zines. But Salad Days fails to set itself apart from any other punk documentary. It spends too much time on the beginning of the '80s and quickly glosses over the rest.

Salad Days mostly features Ian Mackaye sitting on his front porch calmly reciting platitudes while he tells the well-rehearsed story about how The Teen Idles put out their first record or how he didn't mean to start a straight-edge movement. Other musicians appear including Brian Baker, Alec Mackaye and Henry Rollins. Dave Grohl even shows up...but the film might as well be a Minor Threat/Dischord Records biography. At one point someone said something to the effect of "The bands that weren't on Dischord were mostly ignored by the rest of the scene.â€ I started to think about how I couldn't name many (if any) D.C. groups from the time period whose records weren't released by Dischord. The film couldn't either because as soon as the thought came, they had moved onto discussing yet another Minor Threat show. The film shows proof that to some extent Dischord is not representative of the entire scene, and then continues to ignore that whole section of the community anyway.

There are some shining moments though -- it makes an attempt to explore the regionalized and little documented go-go scene but fails to make the obvious connection to its influence on Fugaziâ€™s aesthetic. It explains more of the impetus for the strong political actions and protests taken by the music scene, culminating in the Gulf War protest concert in front of the Capitol Building. It also makes an attempt at examining some of the gender and sexual politics of the time - although I got the impression that it might have raised more troubling questions than it answered and the filmmakers gave up.

But what's most frustrating about the film isn't that it spends 90 percent of it's run time retreading everything you can see in American Hardcore but when it finally gets to little written-about bands, it finishes on the assumption that the viewer either knows a lot about them already or isn't interested. When the film gets to Rites of Spring (Guy Picciotto's pre-Fugazi band), every interviewee claims that Rites of Spring was the best band of the so-called Revolution Summer, but the film covers the band for about 90 seconds and every band member is nowhere to be found. Embrace gets a very short mention while everyone argues about what emo means. Nation of Ulysses is entirely ignored save for one snapshot. The section on Fugazi, a band whose vast importance and influence isn't denied by the filmmakers, is just some reused clips from Instrument. Every hardcore band of five years before gets a lot of well-researched documentation, but these later bands get shafted. I felt like the filmmakers just assumed that anyone watching must already know a lot about those bands so why spend more time on them?

I found the conclusion more than a little confusing. Someone says something about how "the '80s weren't the salad days! These are the salad days! Make it happen! Things are always happening!" Meanwhile the film makes no mention of any D.C. band that got their start after 1995. There's no mention of the state of music in the city today or how the community in the early '80s may or may not have created a lasting impact on the city's music scene.

Salad Days isnâ€™t worth a re-watch. It gives a lot of good information for someone just learning the history, but quite frankly if youâ€™ve watched almost any other documentary on the subject before, itâ€™s not even worth watching the first time.