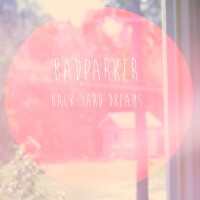 The first full length from Badparker is finally here. Was I expecting more? Yes, but it's still a good release by these indie punkers. There's a couple of noticeably different things about Back Yard Dreams. Their production got a little cleaner, meaning it sounds a bit more professional, which could be a bad thing. I'm not crazy about the way the drums sound, but I do love how Conley's bass was brought to the front of the mix, and is now loud, deep, and chunky. The drums don't sound bad, they just sound a bit over produced for a band like Badparker. While the guitars mostly have a nice clean ring to them, there's moments where they go into complete distortion. The tone is so strong that it actually adds to the intensity, and really makes those moments stand out.

There's a total of 8 songs on this album, and most of them are rather short and simple. One could argue that some of them are too simple, and don't do enough to make them great songs. Maybe that's the charm of the album. A lot of the songs sound similar, and it actually makes for a nice, fun listen. None of these songs are going to change your life, but there's something about Badparker's energy that makes okay songs turn into fun songs to listen to. It starts off with one of Badparker's best songs yet. "Hanging Out" is a really dark song, and starts off rather creatively. Steve's drumming has really improved, as he seems to be trying new things more often on this album. This song tells a horrifying story that leaves you without an answer. The whole vibe to this song makes it incredible. It ends with some epic distortion, and is the perfect way to start off the album.

Next, you hear some clean guitar strokes, and "Linus" is rocking. This song is straight up fun, and really shows a different side to these guys. It has a really catchy chorus, and ends nice and slowly. There's nothing wrong with the next song "Kelly", but it's almost too simple, and too predictable. It's a fun song to sing along to, and goes great after "Linus", but it's not something that everyone will go crazy over. A good song, but not a great one. "Snowflake the Dolphin" seems to be connected to "Kelly" in a way. Both have similar lyrical themes, and I'm wondering if they're both sung from different people's perspectives. This song is better than "Kelly", but it's still not truly spectacular. Â I can appreciate the Ace Ventura reference though. "Cut Up Your Hair Caitlyn" starts off with possibly the greatest and derpiest Badparker riff ever. I can just imagine a bunch of people dancing to it. This is one of the better songs off the album, even if the chorus is a little too simple. Things get intense when he starts to say, "Fireworks were dope. Why do I care what they think?". The band kicks in, and it's great, but it could've been a bit more emotional.

"Heres Mr. Winky" starts off with some of the most out of time bass playing I've ever heard. It's actually one of the few good things about this song. I love the "I keep a gun" line, and the "Whoa's" at the end are awesome. The title is straight up genius, and goes perfect with the first couple lines of the song. I think we all know what it's about...On the bright side, some of Steve's best drum work is at the end. There's some great moments in this song, but also a lot of pointless moments. I was expecting "Nice Hooters" to be a joke song, because it sounds like a title that would come from their old band, The TroTs!, but no. This song is about killing yourself, and has some of Cameron's best lines yet. It starts off exactly like "Orange Julius" by Joyce Manor, which is an awesome little ode. "I'm just killing time before I kill myself", and "I'll throw a clock out the window just to watch time fly" are classic lines. The melodies don't live up with the lyrics, making this my least favorite song on the album. The clever title with depressing lyrics is hilarious though.

Things end with "Ceiling". This song is trying so hard to be very emotional, making it not very emotional at all. The lyrics don't reveal enough, and the melodies aren't strong enough to make this song amazing. "This dust in my eye makes me want to cry" is a great line, but this song just doesn't do it for me. I can appreciate the intensity, but it's not intense enough. The distortion at the end is a great touch, and really makes the album feel complete. It might sound like I'm dissing a lot of these songs, but in the end, this album's really fun to listen to. It's one that you can put on for whatever mood you're in. I can imagine a lot of these songs being great live tracks. It didn't quite live up to my expectations, but it's a fair debut from the most exciting indie punk band around.