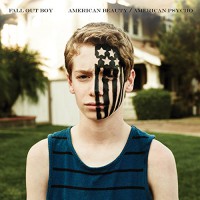 The latest Fall Out Boy album we had all been waiting for had finally arrived... Or had it? American Beauty/American Psycho is an excellent, catchy, pop come back with a few powerful, punk twists. Originating from Chicago, Fall Out Boy grew up in the punk scene, playing along side bands like Rise Against and various other lesser known artists. As time passed, however, Fall Out Boy's sound became much more modern, and a lot less like the young punks we had all grown up loving.

After the release of the last album, Save Rock And Roll, the idea of Fall Out Boy returning to pop punk seemed distant and altogether impossible. Nevertheless, Pete Wentz (bassist) and Patrick Stump (singer/guitarist) had obviously poured their heart and soul into every song on the album, regardless of the change. American Beauty/American Psycho, on the other hand, not so much.

Yes, the album is very catchy and they make you want to dance, but that is as far as the quality of this album will go. Lyrically, this is the most limited album the band has done to date, with repetitive verses and choruses that leave you wondering where all the classic Fall Out Boy went. The word choices are empty calories with a good beat. American Beauty/American Psycho is far from enough to satisfy fans' hunger, and neither was the band's choice to follow up the album with a co-headlining tour with rapper, Wiz Khalifa this summer. The entire era for the Chicago band feels incredibly forced and, unfortunately, very ill-thought out.

All in all, if you're looking for good, old, empowering Fall Out Boy, then American Beauty/American Psycho is not for you. It lacks all the substance and the meaning that the band is known for, and is diminished to a dancey, synth-pop disaster. Sorry, Fall Out Boy, but "just one mistake is all it will take", and this album certainly will not be remembered for centuries.