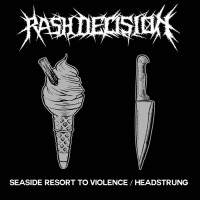 Iâ€™ve been watching Rash Decision play for pretty much the entirety of their 9 year life span. Saying that, they havenâ€™t always been good. There were a couple of years there where they sounded like the kind of band youâ€™d expect to find in the depths of Cornwall. There were times when they were dirty, uncool punk rock.

This made the release of their previous album (I straight up contest that these are â€˜Epsâ€™ as the band claims) Seaside Resort to Violence all the sweeter. With a slew of line-up changes, and plenty of touring under their belt, Rash had become a really decent Municipal Waste-sounding thrash band, complete with interesting riffs and dueling vocals. I caught them live a couple of times in 2015 and they were tight as hell, and now with all three standing members singing leads and contributing to song-writing duties, Rash Decision had become a formidable force that even I with my embarrassing pop-song sensibilities and lack of thrash knowledge could enjoy. Seaside is a really good, powerful sounding thrash record (previously only on CDR) which you should be chuffing pleased about as itâ€™s included in its entirety on the B side of this release.

Headstrung itself (released officially on Valentineâ€™s Day) is another step forward. The opening to Rumblestrip caught me instantly as a somehow more accessible Rash Decision. Itâ€™s still probably not music for your mum and dad, but the excellent Adam Chinner (Freefall Recordings) production is finally showcasing everything that they can bring to the table, and they in turn seem comfortable enough with their brutality that theyâ€™re happy to experiment with the odd slow bit, and some exciting chord shapes. The sound is no less controlled, but itâ€™s been tempered: where the feedback squeals on Headstrung it sounds cool, on Seaside it actually TASTED painful. Dave, Simon (guitar), and Kevâ€™s (bass) vocals all sound distinctively different and they dip in and out of each otherâ€™s songs in the style of all your favourite rap groups. The fact that there are three different songwriters on offer here really adds to the development of the bandâ€™s sound and the listenability of Headstrung as an album. Daveâ€™s voice has never sounded better, Kev brings a slightly more old-school punk vibe, whereas Simon experiments with some big riffage and sometimes effected (I donâ€™t want to say joke) vocals.

Completing the package is the fact that Rash Decision are SO much punker than you that theyâ€™ve persuaded 12 labels to chip in on the vinyl release, some of which seem to have been chosen exclusively for their badass names. Yes, Iâ€™m looking at you â€œRip Roaring Shit Storm Recordsâ€. All told the album is a real good piece of art and could easily see the band pitched over to Florida for the heavier edge of the Fest, and should certainly up their appeal to domestic and Europeans fans of the punk rock.

Iron Maiden: The Book of Souls