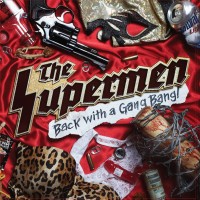 As a kid, I used to hide from my parents to listen to 2 Live Crewâ€™s 1989 raunch-fest As Nasty as They Wanna Be. As an adult, I hide from my kids to listen to things like The Dwarves, The Meatmen, The Mentors etcâ€¦ I can now add The Supermen to that list. They are a four piece sex and wrestling obsessed punk band from St. Louis, MO. Back with a Gang Bang is their filthy, disgusting and thoroughly entertaining LP. If youâ€™re the easily offended type, you should probably stop reading this now. If youâ€™re sensitive to micro-aggressions, youâ€™re going to be destroyed by the macro-aggression that is The Supermen. The self-proclaimed â€˜Bad Boys of Rape Rockâ€™ (are there any â€˜Good Guys of Rape Rockâ€™?) will have their way with your gentle spirit and leave you sobbing and curled up in the fetal position. The Supermen use both pornographic and Nazi imagery to piss all over the usual standards of good taste.

The Supermen have a couple of undeniably positive things going for them. First, they make driving, kick-ass punk rock music. The songs also feature heavy metal type guitar solos and memorable shout-along choruses. Second, they are pretty damn funny. The macho and oblivious thing really works for them. They sell it by keeping straight faces and never breaking character. The lyrics are delivered in a tense, high-pitched yell that varies very little from song to song. The pun that is the title track opens the album and sets the breakneck pace that continues for most of the thirteen songs. â€œGirls Like Spermâ€ keeps things ludicrously tongue in cheek. â€œBlood, Honor and Pussyâ€ could be the bandâ€™s theme song. (Does that title sound familiar Dwarves fans?) â€œRudoâ€ dives into the bandâ€™s other obsession, the equally disturbing world of professional wrestling.

â€œCuteâ€, â€œFitness Model Mother Fuckerâ€ and album closer â€œChampionâ€™s Burdenâ€ describe in no uncertain terms the band membersâ€™ physical and mental superiority. â€œIâ€™ll Fuck You â€˜Till You Love Me Faggotâ€ might be my favorite song on Back with a Gang Bang. I know youâ€™re cringing right now, but hear me out. The lyrics are made up entirely of lines spoken by â€˜Ironâ€™ Mike Tyson at various press conferences. Itâ€™s clever, catchy and funny as hell. â€œDevious Oneâ€, â€œTrophy Huntâ€ and â€œBad Reputationâ€ brag about the bandâ€™s copious amount of conquests and sexual exploits. â€œWhite Women in Distressâ€ adds a racial element just to make sure that everyone feels even more uncomfortable, and maybe to prove that theyâ€™re equal opportunity offenders. â€œSick Sick Mindâ€ goes int GG Allin territory with the added threat of physical violence.

The Supermen are a hostile punch in the crotch to the current PC punk environment. Thereâ€™s lots of bands out there trying to be dirty and controversial, but few of them can back it up with the musical chops of The Supermen. I understand that the label had a hard time getting anyone to review this record. Itâ€™s sad that the punk community is so easily spooked. Are we so simple minded that we canâ€™t tell the difference between sexism and satire? Punk is supposed to be about pushing boundaries, even if it seems repugnant. I canâ€™t in good conscience recommend Back with a Gang Bang to everyone, but if you enjoy any of bands I mentioned previously, I highly recommend it. Just donâ€™t listen to it with your parents. Or your kids.

The Island of Misfit Toys: I Made You Something

Hipshot Killer: They Will Try To Kill Us All