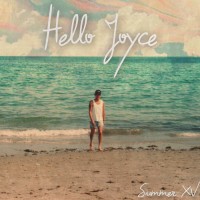 Hello Joyce are one of the most interesting bands in the Tampa area. They seem to combine elements of surf rock, indie pop, and straight up jangly pop.

You might know the guitarist as being the singer and guitar player in Badparker, but he doesn't sing lead in this band. Kyle D. Muti is the lead singer, and there's something about his casual old school voice that can be a bit frustrating at times. It almost feels like he's faking his role as a singer and lyricist. All the songs seem to be about failed relationships, which isn't a bad thing, and his voice actually works well with the laid back style this band has. There are times when you just want to punch him in the face though. The production goes perfectly with the songs, and is extremely lo-fi. It seems like the kind of record you would find in some old attic in some old beach house. My first ten listens or so, nothing about these songs really amazed me. They're all decent pop tunes, but it just didn't resonate with me at all.

One day I was driving through the dark streets of a neighborhood that was practically on the beach, and the whole album suddenly made sense. The setting was right, it was late at night, we were slightly lost, and it was really windy. The sounds and melodies hit me hard, and it was a great experience. That's probably the only time I would actually want to hear this album, but it would be worth it. That being said, it's not the kind of album you can put on whenever and be moved. It's all about the time and the place, which is actually pretty cool.

Every member in this band really brings quality playing to the demo. Kyle brings some of the best bass riffs I've heard in awhile, while their drummer is a really solid player. Nicholas Remy is in charge of the synths, and he handles them well by only playing when necessary. Cameron's backup vocals are insanely high, and almost inaudible. They're actually nicely mixed, and his guitars sound jangly and vibrant.

The album starts off with "Horrible Time". I first heard an acoustic version of this song on their YouTube, but they have since taken it down. That version contained nicer stretched out harmonies and melodies, and was all around better. Let's just say I had a horrible time listening to this version for the first time. Everything that made the song a good song was not there. This song is sarcastically honest, and it has some nice synth work and backup vocals, but it's nothing that blows my mind. Next up is the pop song "Peaches", which is probably my favorite on the album. The memorable chorus and depressing feel it has makes it a classic track. Definitely a must hear song. The third track is "Dragging On", which might make the album feel that way. Not a bad track, there's just not enough to make it great. The lyrics can be extremely relatable to most, but the melodies don't live up to them. I do love when it calms down, then erupts into a beautiful concoction of instrumental goodness. "Bee Stings" follows next, and is one of the best song on this. The undeniably catchy bass riffs are at their all time best here, and the lyrics are quite genius. The guitar goes perfectly with the rest of the melodies. I always cringe at the "My hand is pretty swollen" line, but that's just me. It's definitely the most interesting song on here, because it's actually quite creative. Is starts off super weirdly though, which is a great thing. The chorus will be stuck in your head for days.

"Red Eyes" finishes things off, and this song took me awhile to fully understand and remember. These songs are generally poppy, and you'll probably know them all within a few listens, but this one took me some time to get to know. It all paid off, since this is one of my favorites on the EP. I'd say it's one of my favorite songs of all time. Something about its dreamy, yet powerful instrumental, makes me love this one.

The demo definitely ends on a high note. There's nothing particularly wrong with this demo, but it could have been a bit better. Some of the songs are amazing, the rest are okay tracks to listen to. The demo as a wholeÂ is still a nice, relaxing listen. Reviewing this demo actually made me like it a bit more. For me, its all about where I am, and the mood I'm in. Sometimes it's a really great listen, but most of the time I'm wanting a bit more. They've already shown that they can write incredible songs, but they just need to decide which ones to keep, and which ones to put on some B-Sides album.

Maybe I'm knocking them a bit too hard. It really is just a demo. I like these guys, and I expect great things to come for them. I love three out of the five songs, but for some reason, those two that I think are okay drag me down. It's a good start for a band who's clearly destined for greatness.

Hipshot Killer: They Will Try To Kill Us All

Say Anything: I Don't Think It Is