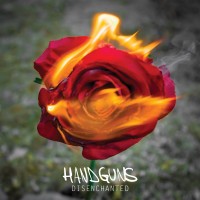 Following the success of their 2014 album, Life Lessons, and a laundry list of shows and tours, the Harrisburg, PA boys are back with a stellar new album. The fast-paced, emotionally driven album is not a far calling from Handgunsâ€™ past works, where lyricism has played a major part in the adding depth and uniqueness to their music in a flooded pop punk scene.

From the opening track, â€œSelf Portraitâ€ (which comes complete with a empowering speech spoken by Paul Danoâ€™s character from the movie Little Miss Sunshine) to their scathing impression on the hypocrisy and stuck-up attitudes of some music fans in â€œCarbon Copy Elitist,â€ this album feels like a true statement from the group. The albumâ€™s sound goes above and beyond, offering listeners a musical pallet complete with driving, energy-inducing bangers to sad, punk ballads that are akin to the early days of Man Overboard.

For a band that has been gutted so much that none of its original lineup is part of the group, you can really feel the members meld on this record to create a very clean sound. The opening of the title track on the album begins with Taylor Eby playfully attempting start gang vocals and kicks into an aggressive rally of voices, drum and guitar that has lit a fire inside me since I first heard the album. The recordâ€™s whimsical energy is something unique that provides a lighthearted attitude to the entire album. You could feel the fun and enjoyment that came out of writing and producing this record in every song, and thatâ€™s a lot to ask of music these days.

It isnâ€™t enough to say that this is a very solid album and a fantastic addition to an ever-growing Handgunsâ€™ discography. With this album and Life Lessons under their belt, I wouldnâ€™t plan on passing up on the chance to see them live, if I were you.