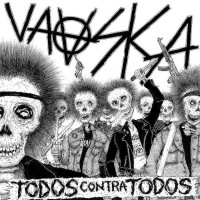 Todos Contra Todos is the third release by Vaaska. The album finds the band slowing down from their previous releases, to a degree. But one of the keys to â€œD-beatâ€ is the beat,and this record just POUNDS. The drumming is brutal throughout the release. The guitars are played rapidly and the vocals are high-pitched, reminiscent of Crucifix . The drumming on this record makes a man want to slam down the gas pedal on a fast car. The lyrics are in Spanish so that may throw some people, but I'm pretty sure most people who like D-beat have been listening to bands from all over the globe long enough that that's a non-starter of an issue.

The one thing I want to point out about the guitar playing here though, even though this is straight for the throat hardcore,the guitarist is working solidly enough with the rhythm section that this ends up being,dare I say this, catchy. Back when music like this was being made the first time around,we were all looking for something new. At the end of the day though, very little of it remained an every day listener. You can play really fast and that's good for listening to it for a while, but you start to get a little bit bored with those records, it's the guys that can write really fast and POUNDING and catchy you find yourself wanting to slam to for the rest of your life.

This brutal slab of Anarcho-Noise is going to go in to that slot. Just a BRUTAL record right from the second it starts and they first put the knife to your throat right until the end. The longest track on the entire thing is 2 minutes,and that's exactly right.