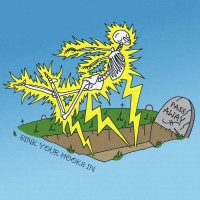 Pass Away are back with their third release in just about one yearâ€™s time. Their latest release, Sink Your Hooks In, is a four-song EP that runs just about ten minutes in length. As with their previous offerings, Pass Away have continued to push confidently forward with their decidedly gritty, melodic and anthematic punk sound.

The band's greatest asset throughout Sink Your Hooks In is making what is an essentially simple style consistently interesting and fresh. Pass Away donâ€™t mess around too much with embellished guitar leads, overblown drum fills, or melodramatic vocal deliveries. Instead, they play a time-honored version of punk rock that hones in on driving guitars, singalong choruses, and up-tempo rhythms. Pass Away seem to draw both musically and vocally on the Bay-Area punk sound of the mid-90s and the similarly influential Gainesville sound of the early millennium. And they do so in impressive fashion.

But what I like most about Sink Your Hooks In are the vocal melodies. â€œDead Sharkâ€ and â€œOld Man,â€ the opening two tracks, deliver some particularly well-placed and dynamic vocal patterns. They add depth to the songs and help bring out the anthematic elements in their lyrics. And Pass Away have certainly made significant gains in simply finding the right time for taking some fun twists and turns with their sound. While â€œCrowheadâ€ and the previously mentioned â€œDead Sharkâ€ have everything typical to Pass Away songs, they also have great bridges that see the band stepping into more experimental guitar riffage. Overall, the songs on Sink Your Hooks In are a bit more polished and poised than previous releases. And why shouldnâ€™t they be? Pass Away know what they do, and they know how to do it really well.

Itâ€™s like I wrote in my last review for these guys, theyâ€™re not reinventing the punk rock wheel here. But they are writing and offering up a great version of that wheel. And theyâ€™re doing it with greater and greater consistency. Theyâ€™ve been playing out more often as well, and that isnâ€™t lost in their music either. What seems to be evident here is that Pass Away have hit their stride. Theyâ€™ve hooked their fish. You get it, I know. Well Sink Your Hooks In is evidence of just those sentiments and is more than worth the nothing it costs to stream or download the EP from Pass Awayâ€™s bandcamp.