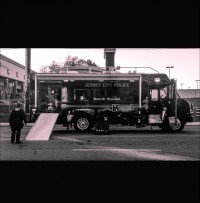 Â  Â  Â On si quieres un movimiento, muÃ©vete., Weather Lore don't sound like they're from Montclair, NJ. With their west coast style hardcore punk, their sound and location of origin are tied together a little more neatly when their screamo sides show.Â

Â  Â  Â And show they do, as the choice to merge screamo and hardcore punk is a very east coast thing to do in the first place. The jazz fill heavy style of drumming that has come to inform post-2010 screamo gives way to dbeats or blast beats, which push forward sneering guitar parts played irresponsibly fast, with shrieks filling each moment left open by any of the other instruments. Oftentimes, this happens in the same song. On the song "this screen will inevitably leave you blind," the band goes from a breakdown that will leave a living room destroyed into a celebration of everything hardcore has learned from Discharge. At other times the band will stop on a dime and transfer into some superhuman show of the limits of the pairing of human speed and intensity. Lyrically, the songs deal largely with differing themes of bleak introspection, but finishes the demo off with the song "breakfast together," a simple reminder to remember to stay active in this life until the moment you've left it.