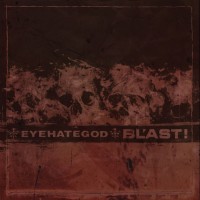 Blâ€™ast! originally formed in Santa Cruz, CA more than 30 years ago. Theyâ€™re considered an American hardcore band, but their sound has always tended toward the heavier, later era Black Flag stuff. Their early LPâ€™s were even on SST Records. The music of Blâ€™ast! kind of bridged the gap between hardcore and what would later be known as grunge. (Before grunge got too watered down.) Their lineup has changed a lot over the years, but fortunately their sound has not. For this recording, original members, singer Clifford Dinsmore and guitarist Mike Neider, are joined by bassist Nick Oliveri (The Dwarves, Queens of the Stone Age, Mondo Generator) and drummer Joey Castillo (Sugartooth, Danzig, Queens of the Stone Age). (Does anyone really know how many bands Oliveri is actually in?) Itâ€™s also worth noting that various incarnations have included Dave Grohl on drums, Chuck Dukowski on bass and William DuVall (current Alice in Chains vocalist) on guitar. Blâ€™ast! contributes â€œCut Your Teethâ€ to this little two song, seven inch record. Itâ€™s built around an excellent riff that might owe a small debt to AC/DCâ€™s â€œLet there be Rockâ€. Itâ€™s raw and abrasive with its repeated â€œDamned if you do, damned if you donâ€™tâ€ and builds tension all the way to its satisfying ending.

EYEHATEGOD might be the junior band on this split, but theyâ€™ve been around for more than 20 years. Like so many bands from New Orleans, they specialize in heavy, sludgy doom. Itâ€™s exactly what youâ€™d expect from the city that gave us Down and Crowbar. (Not surprisingly, the bands have shared members.) The vocals were even recorded by Pantera/Down/Superjoint Ritual singer and alleged racist Phil Anselmo. â€œThe Liars Psalmâ€ plods along like a walk through thick mud, where every step comes with a huge amount of effort. The vocals are harsh and so is the message. EYEHATEGODâ€™s song is slow and ugly and pretty great. If Blâ€™ast!â€™s music is like a kick in the head, then EYEHATEGODâ€™s is like being slowly strangled. Either way itâ€™s painful. (In the best possible way.) This is a pretty inspired pairing by Rise Records, a label generally not known for such heavy stuff. The bands are longtime friends and fans of one another, and their similarities and differences are on full display. Highly recommended if youâ€™re a fan of either band, or just enjoy unpleasant music in general.