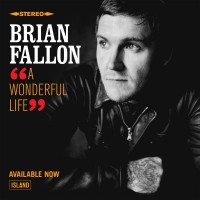 Brian Fallonâ€™s first solo album, Painkillers will be released in early March. The first single off the new record, "A Wonderful Life" was released in early December, a nice early Christmas present for those looking forward to the release. The single at first listen sounds like a The Gaslight Anthem song through and through. As the first verse is vintage Fallon, â€œMost of this life's been a drag of a high/And lows like a blow in a paid thrown title fight/Most of my sins were born in a kiss on a night like this.â€ The song is full of classic Brian Fallon references to old time picture shows and heavy chains on our souls. The chorus has a simple message that everybody should be able to relate to, â€œI want a life on fire, going mad with desire/I don't wanna survive, I want a wonderful life.â€

The release is Fallon doing what Fallon best and he stays true to what he's done with his previous work. Since the release of A Wonderful Life Fallon has released two more singles, "Smoke", and "Nobody Wins." Both of which any TGA fan will fall in love with. Brian Fallonâ€™s ability to write an emotionally charged song is well known, thatâ€™s what makes him (and Gaslight) so good. The countdown to the release is on.