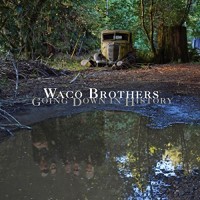 Â  Â  Â  Â  Â  Â  Â  Â  In 1985, The Mekons recorded what many consider to be the first alt-country album. Fear and Whiskey captured the bandâ€™s love for American county, back when that wasnâ€™t something that sent many music fans recoiling in fear, without losing any of their punk rock passion or leftist political views. Front man Jon Langford would start The Waco Brothers in the mid-nineties as a way to keep playing this genre of music while The Mekons focused on a more punk/post-punk sound. Over twenty-one years later the band has released Going Down in History that shows even if the bandâ€™s tongue in cheek send up of David Koesh and his followers isnâ€™t culturally relevant, this band certainly still can be.

â€œDIYBYOBâ€ is a great rocker that opens the album, and while it remains lyrically simplistic, the chorus, which is the songâ€™s title repeated, is a welcome nod to the long time punk ethos of self-reliance. When put to a rocking country tune, that wouldnâ€™t be out of place on a Rolling Stones album from the mid-seventies, and coupled with Jon Langford still sneering vocals, you know that honesty is something this record wonâ€™t be short one.

A few tracks later, the song â€œReceiverâ€ opens up with a guitar a vocal interplay that wouldnâ€™t have been out of place on any of the really good outlaw country albums that came out in the 1970â€™s. While the song focuses on Langford being connected by a wire to a machine that tells him heâ€™s a liar, its ambiguous enough you donâ€™t know if heâ€™s talking about an audio receiver or a polygraph machine. The song makes good use of simple lyric, strong vocal and great guitar hook though. So, even if the song were total nonsense, the band manages to pull it off in a manner so many bands that dabble in retro rock sounds cannot.

While generally branded as an alt-country band, The Waco Brothers also have a firm understanding of music history. As many of the country bands their sound pays homage to are precursors to what would become early rock and roll or country musicians who embraced the rebellious nature of rock music, it only makes sense theyâ€™d draw inspiration from early rock music as well. They do this with a great cover of the Small Faces 1966 single â€œAll or Nothingâ€ which shows that while Langford and co-vocalist Dean Schlabowske both have powerful and aggressive voices, they are capable of embracing the vocal harmonies of Steve Marriott and company as well.

Perhaps the most rocking, and by that virtue most punk influenced, song on the album is the title track â€œGoing Down in History.â€ While the song opens with a fairly standard garage rock feel, with a bit of fiddle thrown in for good measure, the song builds to a breaking point through its final moments. All the while Langfordâ€™s lyrics speak of self-preservation in the face of adversity and giving a symbolic middle finger to all those who stand in your way. Perhaps most striking about this song is the interplay of Langfordâ€™s vocals, which at time sound like early Joe Stummer, and a very clean backing vocal.

The album closes with the roots rock number, â€œOrphan Songâ€ which musically mixes a great piano playing and fiddle with some of the best guitar playing on the album. The call for community in the face of adversity is brought to the forefront here as Langford sings, â€œâ€¦ we all need a brother, a sister to see us through. It could be alright, I will be your brother for the night.â€

While alt-country is as wide and all-encompassing of a genre as punk these days, with everyone from Slim Cessnaâ€™s Auto Club Band and The Bottle Rockets fitting under the umbrella. The Waco Brothers are still at the forefront of a genre Jon Langford helped pioneer over thirty years ago. And they do it by simply playing great country influenced rock music with a lyrical and vocal style that would have made Joe Strummer proud. Songwriter and country music legend, Harlan Howard, once said the definition of a country song is â€œthree chords and the truth.â€ With that in mind, regardless of what niche genre you want to put the Waco Brothers in, it is safe to say country music is safer in their hands than it will ever be in the hands of anyone writing what many purists now simply refer to as Wal-Mart country.

The Smith Street Band: I Scare Myself Sometimes [7-inch]