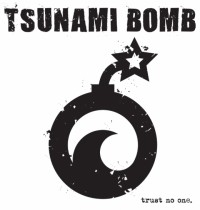 The most striking aspect of Tsunami Bombâ€™s early EP collection, Trust No One is the sheer recklessness of the release. Sure, itâ€™s rooted in pop-punk- though that term isnâ€™t meant to be reductive. If anything, on the compilation the band is more punk-pop than the flipside, taking the standard rock and roller formula and pushing it into weirder and wackier shapes rather than taking a nasty genre and making it nice. But, as the compilation rips through a series of EPs and single releases, Tsunami Bomb seems to have a reckless abandon as to what they are supposed to be, which, ironically, is what forms their identity.

Opening track, the 1999 cut of â€œLemonadeâ€ creates a rough idea of the bandâ€™s idea. Guitarist Brian Plink and bassist Dominic Davi work on economy, playing simple, hooky lines that seem written specifically to counterbalance vocalist Agent M. As Plink and Davi strike away, Agent M quite cleverly plays against the rhythm, spitting out a spiteful and jaded tune, which also, plays against the songâ€™s sunny nature.

â€œIrish Boys,â€ which features keyboardist Oobliette doing a first wave SF punk vocal take, finds the band opening with a Thin Lizzy-meets-Pogues intro before they suddenly rip into a Maiden style charge before tumbling into an almost hardcore blast. Meanwhile, Oobliette rides the rhythm in stride, exemplifying why this band pulls off these diversions so well: confidence and a lack of experience.

Itâ€™s this constant changeup which keeps the disc so invigorating. â€œ3 Days & 1000 nightsâ€ has a sort of Misfits-new wave bounce and â€œNo Good Very Bad Dayâ€ is a raw rocker that is more concerned with momentum than second guessing itself.

In their future releases, Tsunami Bomb would perhaps coalesce to a more singular sound. But the formative years collected here showcases some of their most daring, and best, work. Thereâ€™s something to be said for a creative unitâ€™s initial spark, when hey are completely unhampered by audience expectation- and even their own planning- and this release makes that clear.

Slaves: Are You Satisfied?