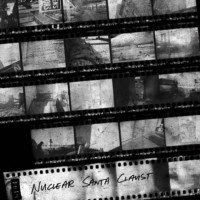 The title might be in French, but the Je Ne Sais Claust EP by this Brooklyn based punk band is like something from Greek mythology. Their name sounds like a grindcore band, the cover looks like an old glam record, and they actually sound like a cross between old Queens punk bands like The Ramones and the Dictators but recorded lo fi.

I do like the throwback revival of that style of punk and its entertaining to listen to. The lyrics are pretty hard to understand from the recording quality, which is still better than most intentionally lo fi recordings to be fair. I thought "Sayonara Baby" was a cover of Santa Baby at first, but this is evidently not the case on closer inspection.

The guitar work is pretty damn good, too. There are some very well done alternately crunchy or soaring chords, particularly in "Singularity." Plus, I like songs about the topic of singularities. They know their science. The skilled guitar riffs do balance out the difficult to hear vocals somewhat. The drumming is focused and keeps the pace of the songs well.

The band comes from Cleveland originally but moved to Brooklyn so its pretty interesting how they combine their mixture of old school Detroit and Queens style garage punk and newer styles. All things considered, they could become a pretty significant band.

Tsunami Bomb: Trust No One