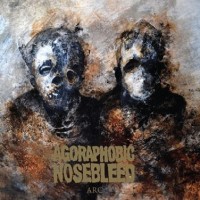 Fans of the renowned grindcore group might be very surprised by this new release. Some would even say that Agoraphobic Nosebleed have completely reversed their formula. When the band first started off in 1994, they put out songs that lasted only a few seconds. It got especially ridiculous with their 2003 release Altered States of America, which contained more than 100 tracks and clocked under just 22 minutes. Overtime, songs became longer and albums featured less tracks as ANB branched off into death metal. But no one was prepared for the 2016 unveiling of Arc, which contains only three tracks and clocks a bit over 27 minutes.

Arc is the first in a series of four EPs that will explore each memberâ€™s musical influences, starting with vocalist Kathrine Katz, who previously fronted doom band Salome. This explains why Arc is so slow and heavy. The sound is very reminiscent of New Orleans-brand sludge metal, with the right amount of feedback. Even Katzâ€™s vocals sound very similar to Eyehategodâ€™s Mike IX Williams.

Another drastic change is the content of the lyrics. ANB has always had a somewhat comical tone in their songs, but the content of Arc is of a more serious nature. Katz gets very personal with â€œNot A Daughterâ€ and â€œDeathbedâ€, recalling her motherâ€™s losing battle with cancer. Every word is soaked with feelings of guilt, futility and anger. â€œGnawâ€ is a bit more abstract, having been written by guitarist Scott Hull years before the EP series concept came up. The track is still layered with emotion and includes audio samples of psych ward patients talking about schizophrenia and suicide.

Agoraphobic Nosebleed only started playing live shows in 2015, still backed by an electronic drum machine. In previous releases, Hull programmed the drum machine to play blast beats at impossible speeds. But now that the music has slowed down significantly, the drum machine sounds almost human, breaking new ground for the Turing Test (a test where a machine attempts to trick a human into believing it is also a human).

Things will most likely speed back up in the following EPs, but after witnessing the innovations accomplished in Arc, thereâ€™s no telling what we can expect of Agoraphobic Nosebleed.