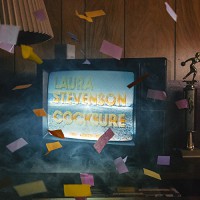 Laura Stevenson's angelic vocals have always been a steadfast part of her music, and they are in no way lacking on her newest album, Cocksure. This record is clean and pristine. The vocals are stellar and the instrumentals drive each track forward with the right power and melody that make this album desirable.

From listening to Lauren when she was still the keyboardist in Bomb the Music Industry!, it was easy to tell she was a very unique musician whose voice could fit anywhere from a grungy punk rock atmosphere to a mellow folk record. It is ultimately in this gray area at which Stevensonâ€™s album thrives. From â€œHappier, Etc.â€ which carries a quick punk rhythm and enthusiastic backbeat, to â€œTicker Tape,â€ which brings light, melodic lyrics and instrumentals that you would be more liable to fall asleep to, the album makes up a very unique set of tunes. And although Stevenson isnâ€™t new to adding diversity to her albums, sheâ€™s met the perfect balance of electricity and relaxation with Cocksure.

The crown on top of this albumâ€™s track list would be â€œJellyfishâ€, which melds Stevensonâ€™s voice with a beautifully crafted drumbeat that almost forces you to tap a toe or bob your head. The song is very fast-paced and complimentâ€™s the full potential of Stevensonâ€™s vocals, letting her have control over fast-paced instrumentals and a piercing guitar. Itâ€™s an outright fun song to listen to and a very solid piece of this album.

It should also be noted that a lot of the songs on this album came from older Stevenson works or demos that Laura had recorded without a full band on a cell phone, so it wasnâ€™t enough to say that producer Jeff Rosenstock had a lot on his plate. However, the album was recorded and mixed perfectly, and is a real gem in Stevensonâ€™s discography.