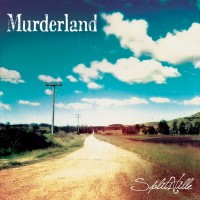 It has been just about four years since Los Angeles, Californiaâ€™s horror pop punk outfit Murderland released any new material, but that has all changed with Splitsville. This time around they have definitely stepped it up a notch in all the right places, but kept what they do best â€“ write super catchy songs about murder, drugs, and damsels in distress.

Though they did take their time to grace us with a new release, Murderland has definitely stepped up their music writing game compared to their previous albums with Splitsville. The seven songs on this release have much more aggression in them both instrumentally and vocally, but the band still kept their overall super-melodic pop-punk sensibilities.

With the track â€œBeach Bunny Babylonâ€ you can really hear how the band upped the intensity with the hard palm muted guitar parts and the intricate fills that are played in between. Once the chorus kicks in, lead vocalist Mike Murder really pushes his singing boundaries with the very anthemic melody in the chorus. Even the backing vocalists hit some pretty high notes when they come in.

But it isnâ€™t just Murderlandâ€™s musical arrangements that have improved here -- the lyrical writing has as well. The bandâ€™s lyrics are light hearted and vividly gory, but they are all in good fun (see â€œScum And Villainyâ€ from Prelude To A Kill). With Splitsville more of their very clever dark humor pops out especially in the song â€œAnother Homicide,â€ with great lines such as, â€œWhoâ€™d have guessed how the story would end?/ A classic case of â€˜guy on the ground.â€™â€

Spitsville is clearly a milestone for Murderland. Compared to the rest of the bandâ€™s discography it stands out as an achievement thus far in their career. This is a very fun and unique release for those who really crave that extra dose of melody in their punk rock (i.e. Masked Intruder, Banner Pilot, Bad Cop/Bad Cop, or others in that realm).

You can listen to this record here.