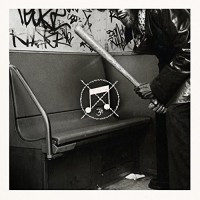 Magrudergrind, the grindcore trio has returned after a six-month hiatus to bring you their newest album, II. To give you an idea of what to expect from this new installment, simply look at the cover of the smiling hoodlum brandishing a bat in a vandalized subway car, with the familiar â€œno musicâ€ logo in the middle. Listening to this album is like being suddenly struck in the back of the head with a blunt object. By the time you regain consciousness, the perpetrator will have already ran off and you would have no choice but to replay the whole scene to make any sense of it. Similes aside, you can expect II to be aggressive, maniacal, gritty and minimalist.

Once again, the album was produced by Convergeâ€™s Kurt Ballou at his GodCity studio in Massachusetts. But unlike the raw sound in previous recordings, the sound of II is a lot more polished, possibly due to the involvement of Relapse Records. Thereâ€™s also the absence of audio clips between songs, which was a staple in Magrudergrindâ€™s music up until now. If anything, it gives the listener less breathing time between tracks. This album is strictly for the masochistic. You have been warned.