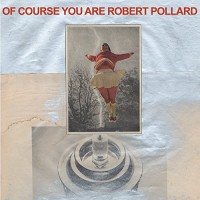 Â  Â  Â  Â  Â  Â  Â  Â  After listening to Robert Pollardâ€™s latest solo release, Of Course You Are, all I could think was, â€œI bet this guy has a killer record collection.â€ The album incorporates elements of every major genre of rock music to have graced the charts in the past fifty years. The fact Pollard can do this and still have a unique voice as a songwriter is a testament to the powers this man truly has. Not only when it comes time to write a song, but also when it comes time to assemble musicians to play those songs.

â€œMy Daughter Yes She Knowâ€ opens the album, and perhaps does so with more volume than any solo Pollard album has opened with in quite some time. This isnâ€™t surprising though, given Nick Mitchell, of Pollardâ€™s arena rock project Ricked Wicky, plays all the instruments on this release. Skirting the pure arena rock of the aforementioned side project, this song draws perfectly from everything good and righteous in the world of power-pop from Big Star to Material Issue with just a bit of Copper Blue era Sugar thrown in for good measure.

True to form though, Pollard is found shifting away from power-pop to drift into the near baroque psychedelic rock on â€œCome and Listen.â€ With the lyrics that bring to mind some of the more unique moments on Loveâ€™s Forever Changes and a baroque musical arrangement featuring piano strings that would have been at home on David Ackles forgotten classic American Gothic, Pollard proves that he is not only worthy of being compared to some of the masters of days gone by, but is likely the closest thing contemporary rock music has to a true musical visionary.

For people who think Pollard is at his best within the confines of Guided by Voices, donâ€™t worry. â€œLittle Pigsâ€ is just that, a great send up to the classic GBV sound. Perhaps none of the major players are present, but everything about this song says it would be at home on any of the, now classic, albums GBV have released across their career.

â€œI Can Illustrateâ€ may be the magnum opus of this album, and one of the finest songs Pollard has ever written. Bringing together a great guitar riff, keys, and Pollardâ€™s always simple but intelligent makes any song this guy touches a winner. Itâ€™s the last minute of this song that make it among the best though, starting off with a killer solo by Nick Mitchell before building in horns and a second guitar that build what starts out as great pop-rock song into a very prog-rock inspired finish.

The jittering shimmery guitar on â€œCollision Daycareâ€ combined with Pollardâ€™s vocal delivery make for a great rock song. Yes, you can hear elements of Paul Collinâ€™s Beat and The Buzzcocks in there, but the way it is all brought together, ripped apart, and rebuilt is pure Rob Pollard.

As music fan, Pollardâ€™s sheer output is intimidating. However, as this album proves, his quality control may be as good as anyoneâ€™s in the business. Iâ€™m not saying a man who is rumored to have written over four hundred songs a year for going on thirty years now hasnâ€™t written a bad song, heâ€™s likely even released a few. But, when someone has been making music for thirty years and is still able to music that is not only vital but still challenges his audience, weâ€™re no longer talking about one of the great songwriters in independent rock. Weâ€™re talking about one of the greatest songwriters in the history of rock period. And this album, just adds to that legacy.

Stray from the Path: Subliminal Criminals