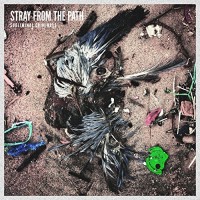 Stray from the Path

From the get-go, Subliminal Criminals is relentless. Heavily politicized and even heavier musically, Stray from the Path's 2015 release is, on its face, an angry, ugly, snarling record. This sort of unflinching aggression should be familiar to long-time fans of the New York four-piece, but repeated listens reveal an album full of unexpected musical technicality and disappointingly uneven lyrical quality.

Though the title of the album (and a good deal of the lyrics) impart the idea of, well, subliminal criminality, the true theme of this record is that of societal decay. In its opening seconds, the recurring sonic symbol of sirens blaring behind all the screaming sets the frantic tone for the album. The initial shotgun-blast of aggression that is "The New Gods" builds to its apex two songs later with "A Badge and a Bullet Part II." From there, the album slows (instrumentally if not tonally) until it ratchets the anger back up to eleven with the stand-out track: "D.I.E.P.I.G."Â

"D.I.E.P.I.G." represents the attitude of the band stripped of all pretense and conspiracy. By turning their anger inwards towards abuses within their own scene, the band strikes an energizing chord and, musically, formulates a truly driving march. It is disappointing then that the sheer power of "D.I.E.P.I.G." is not even approached by any of the four tracks that follow it to close out the album. "Future Sound," the immediate followup to "D.I.E.," is a jarring shift that acts as an entirely unsuccessful homage to the clear influence of Rage Against the Machine and rap music on the politics and cadence of their overall catalogue.

On the surface, Subliminal Criminals is a record designed to get its listeners up off of their asses. It's bombastic, it's energizing, and one can't help but to feel compelled to examine their own prejudices and privileges when confronted with such a relentless sonic assault. However, repeated listenings do not do the whole package any favors. The passion is there, and the musical talent is perhaps overlooked but, as a listener, each spin makes it that much harder to maintain the anger.

Robert Pollard: Of Course You Are