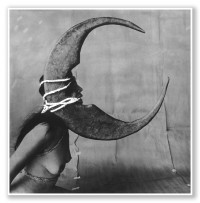 Ghost Bath are an American Black Metal band. Moonlover is an intense album to listen to. Not necessarily in the sonic sense of say how Converge can be overwhelming to someone (thought Ghost Bath do know how to bring the noise), but rather emotionally difficult to listen to. It's a largely instrumental album that is somehow the lovechild of Behemoth and Explosions in the Sky. The lyrics (if there are actually any) are largely indecipherable. Replacing lyrics are tortured screams over soaring guitars. This is most likely intentional, but as with is most art, you should take it at face value. The little connection we as humans can make with music is what makes it so special. An album can mean something very special to one person, and a cacophony of noise to another.

The push and pull within these songs is what keeps you invested as a listener. You are clearly just a passenger, but you want to see where the ride is going.Â "Golden Number" is a nine minute opus that sums up the album as a whole. 6 minutes of intense metal music that I described early followed by three minutes of solo piano playing that will make you think your iPod went on shuffle. The album does a good job of giving you these little reprieves that don't feel like interludes as they do a direct shift in mood. Even the bits of guitar that areÂ reminiscentÂ ofÂ traditionalÂ Asian musicÂ onÂ "Beneath the Shade Tree" never feel out of place. "Death and the Maiden" closes out the album with the same tones that opens the album. It lets you know that you've completed your journey. You can either step off or give it another go 'round.Â

Fan of Wolves in the Throne Room and Panopticon will appreciate Ghost Bath's take on black metal. It's not for everyone, but that's the thing with art. People keep making it whether you like it or not.Â