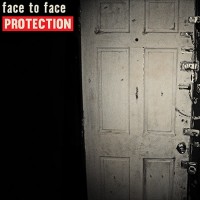 Iâ€™ve been mostly bullish on Face to Face since they got going again in earnest in 2008. Their live shows have been enthusiastic, high energy events, and I liked Laugh Now, Laugh Later (2011) a lot. Unfortunately, I enjoyed Three Chords and a Half Truth (2013) a whole lot less. The songs were alright, but there was too much pop and not enough punk. The production was toothless. In other words, there just wasnâ€™t enough bite for my tastes. Donâ€™t get me wrong, I donâ€™t expect new Face to Face material to send a shiver down my spine the way that Big Choice or Face to Face did. Weâ€™re all 20 years older and a ton more jaded. My hope for Protection was that it would be closer to Laugh Now than Three Chords.

Itâ€™s clear that Trever Keith and the boys were shooting for a retro vibe. Theyâ€™re back on Fat Wreck Chords for the first time in more than 20 years. The cover art conjures up images of Donâ€™t Walk Away (1992), or maybe even (gasp!) Ignorance is Bliss (1999). They even turned to the definitive 90â€™s punk producer (if not the greatest punk producer of all time), after handling production duties on their last few albums by themselves. Bill Stevenson has made a great sounding record and managed to coax some marvelous performances from these grizzled veterans. A lot of stars seemed to align for this thing to happen the way it did. While you can never truly go back, Face to Face was certainly giving it their best effort.

Opener, â€œBent But Not Brokenâ€, is a solid song about keeping an open mind in spite of growing religious and political intolerance. Second song, â€œI Wonâ€™t Say Iâ€™m Sorryâ€, is one of the albumâ€™s best. It definitely turns up the speed and intensity a notch. Itâ€™s also the first of a handful of songs about looking back. â€œDouble Crossedâ€ looks back with a bitterness that has faded with time. â€œIt Almost All Went Wrongâ€ looks back fondly on something that once felt impossibly difficult. Excellent closer, â€œAnd So It Goesâ€, looks back and accepts the way that things turned out, for better or worse. At this point, I have to mention Scott Shiflettâ€™s bass playing. Itâ€™s outstanding as usual, with several runs that jump right out of the mix. His contribution is probably undervalued, as is the instrument in general.

The title track has all the key elements of a classic Face to Face song. Itâ€™s got a familiar noodling lead guitar line, a driving riff and a catchy chorus with lots of whoaâ€™s. â€œKeep Your Chin Upâ€ is probably the weakest song on Protection. The music is great and itâ€™s catchy enough, but its greeting card sentimentality falls a bit flat. Fortunately, thereâ€™s also a couple of nearly perfect Face to Face songs on Protection. â€œFourteen Fifty-Nineâ€ is an angry diatribe against our societyâ€™s obsession with fame. Keith turns Andy Warholâ€™s famous quote into a caustic mantra. â€œThis is a hate song/Will you please shut your gaping mouth...Fourteen fifty-nine/I hope it wonâ€™t be long before you dieâ€. â€œMiddling Aroundâ€ hits where â€œKeep Your Chin Upâ€ misses and challenges the listener to be something more than mediocre.

Ultimately, itâ€™s Keithâ€™s songwriting that has kept Face to Face at the top of the punk rock heap for a quarter of a century, and thereâ€™s definitely some really great songs here. While I was hoping for an album that would stack up well against the bandâ€™s recent stuff, Face to Face made an album that stacks up well against their best stuff. This actually reminds me a lot of Big Choice. I must admit, Iâ€™m often guilty of hoping that guys in their 40â€™s make the same records they did in their 20â€™s, and this comes close. Protection has a youthful spirit, but also the benefit of a world weary wisdom. Face to Face fans (myself included), are going to be very happy.