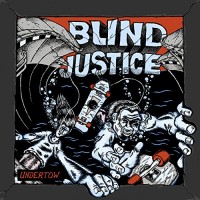 New Jerseyâ€™s Blind Justice are another in a growing outfit of young and ambitious hardcore punk bands these days. They are popping up on more and more of the big hardcore package tours, most recently Terrorâ€™s 25th Hour Tour, as well as the big American hardcore festivals. With the release of their first full-length, Undertow, Blind Justice certainly indeed appear to be aiming for some staying power in their respective genre.

Undertow itself isnâ€™t a game-changer. In fact, itâ€™s more of an old reliable if Iâ€™m keeping with the clichÃ©s here. Blind Justice are austere in both lyrics and music. The structure doesnâ€™t particularly stray too from the traditional horse-hop riffs, into guitar and drum builds, and closing with foot-stomping mosh breaks. They are sparse on guitar leads or effects, major bass fills or drum-led tempo changes. The vocals deliver unembellished lyrics with aggressive direction. And all of this amounts to a quality release. In context, that is. I mean, Undertow is quite simply a hardcore punk record with all the necessary ingredients therein.

The albumâ€™s second track, â€œGood Riddance,â€ stands out as strongest offering on the LP. The opening guitar line aptly crunches into a choppier bass-laden riff that shows the strength of the recording overall, and the song itself closes with an excellent mosh riff that certainly had my shoulders bouncing. They even managed to sprinkle a brief lead in there as well. Similarly the title track â€œUndertowâ€ manages to pull off the same pattern and with great precision. And itâ€™s in the style of these two songs that I hope Blind Justice continue to write their music. The small additions of a few guitar leads and less-than-typical verse riffs go a long way in elevating what these Shore Style guys are doing.

And so it is that Undertow is a strong offering of ascetic and spartan hardcore music. It delivers eleven songs, all under three minutes in length, laden with angst and disillusionment. Now in the interest of honesty, Iâ€™ve seen Blind Just twice at this point. Their live show is admittedly energetic and chaotic, and feeds ravenously on crowd participation. But that energy and chaos does shine through on this record. Iâ€™m sure thatâ€™s due at least in part to Undertow having been recorded by Dean Baltulonis, a man whoâ€™s worked with Sick of It All, American Nightmare, and quite a few other hardcore bands.

So I think Iâ€™ve painted about as much of the Blind Justice picture as I can here. Undertow packs a punch. Itâ€™s hardcore. To quote, â€œJust fuck off for a minute and stay the fuck outta my sight. Iâ€™ll always be a fuck up and Iâ€™m not getting any better. Just a stupid fucking skate rat. Iâ€™ll be a bad kid forever.â€ Indeed.

Jasper The Colossal: Take Your Time