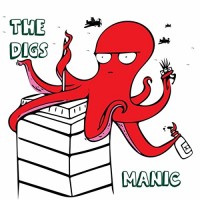 The Digs are a three-piece rock-and-roll group from Boston, MA, and Manic is their first full-length. With these 11 tracks, The Digs have placed themselves firmly at the crossroads between pop-punk and no-frills riff rock. â€œOne, Five, Six, Fourâ€ is essentially The Digsâ€™ pledge of allegiance to their genre, bluntly demanding: â€œGive me four straight power chords / The 1 the 5 the 6 the 4 / The kind of songs that got me through / Something simple, something trueâ€. Theyâ€™ve clearly held true to this sentiment on Manic, and the result is a record thatâ€™s simple, yet fun at every turn.

â€œReady Setâ€ gets the album off to a roaring start with its frantic pacing and driving riff, daring you not to headbang. Up next, â€œManicâ€ keeps things rolling with another powerful riff, and â€œPreachâ€ continues in a similar vein while taking a shot at organized religion. Itâ€™s clear right away that The Digs are experienced, the playing is tight and the songs are well-written. â€œGunslingerâ€ is a nice tune that pays more homage to the bandâ€™s hard rock influences, and â€œOne, Five, Six, Fourâ€ is basically a pop-punk anthem that fell on the floor: a little dirtier but a little better for it.

My favorite tracks of the album actually line up back to back at the 6 and 7 spots. â€œPhotoelectricâ€ is hooky and has deliciously fuzzed-out blues riff. The lyrics are a little goofy, but the delivery is spot on and itâ€™s hard not to smirk a little when you hear a soulful voice singing lines like, â€œI went shopping for some nails / But instead I got screw-ewedâ€. The follow-up is â€œGreen Lineâ€ which ups the ante on goofiness, but is an incredibly endearing listen for anyone from Boston, or anyone whoâ€™s ever been screwed over by public transportation.

The last four songs hammer out some more muscular riffs and plenty of hooks, although nothing quite as memorable. That said, this is an album that doesnâ€™t have a let-down moment. Every track gives us The Digs at full strength, and thatâ€™s a powerful thing to hear. While theyâ€™re not exactly breaking new ground, The Digs have crafted a damn good rock-and-roll album thatâ€™s also just straight-up fun.