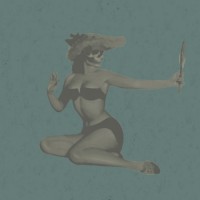 Atlanta punk outfit Dead by Fortyâ€™s new EP Gnarcissist is an album I really want to like a lot more than I do. The reason for this all comes down to one prevalent feature that just bothered the heck out of me. But before we get there I want to talk about what I do like.

The opening track, â€œ12 Gaugeâ€ is a muted melancholy affair that constantly defies expectations. This song features several build-ups as it progresses that donâ€™t pan out as one would expect (intentionally, one hopes), which only takes it to a higher level. The lack of an over-powerful climax was unanticipated and the song was wonderful to listen to.

â€œSotally Toberâ€ and â€œChokeholdâ€ are decent enough affairs, if nothing terribly special. I think the former suffers from lack of closure, in that it suddenly ends at a point where I didnâ€™t expect it, and was hoping to get more from the song before it was over. â€œChokehold,â€ on the other hand, is performed well, but it seems like a song without direction. The parts never become a whole and, at the end, I was just left wondering why it was even on the album.

â€œOld Habitsâ€ is likely the best on the album after the opener. Solid through and through, it stands up well upon repeated listenings. The closing track, â€œUndone,â€ also fares well.

But all of this is overshadowed by on major issue: Over-dubbed vocals. The first track starts out well enough, and, as it builds, the vocals are soon accompanied by the lead vocalist harmonizing with himself, but doing so in a low almost â€˜spokenâ€™ singing (think Marty Gregori from Bracket). This works to great effect for the song. But then it happens over and over for the rest of the EP, with some tracks having it for the entire song.

What worked well for the opener soon detracts from the rest, and became tiring about halfway through the second track. It comes to the point where one feels ecstatic when they stop doing itâ€¦ even for a verse or two, and annoyed when it starts up again. Iâ€™m not sure what the decision process here was, as the singer has a good enough voice all by itself for the style they are going for and backing vocals, when used sparingly, added the needed punch at the right time. But, in the end it was almost grating- taking away from what are, at worst, good songs and, at best, awesome songs. 