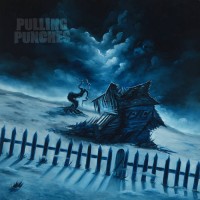 Pulling Punches is a newish Philadelphia band composed of guys that have been tumbling around the hardcore and post-punk scene for the last two decades. Their debut physical release, The Old Colors Are Dead bears trace of their heritage, but also shows a certain re-invigoration for the band members.

Perhaps because the members have filtered through the different genres of harder punk, the EP isnâ€™t so much a genre exercise as a survey of the ambit of modern punk. Opening track, â€œBeautiful & Miserableâ€ is a straight up hardcore basher. The band tears through the track in a mix of hardcore and metalcore, using crashing riffs and screamed vocals to carry the day. But, despite the blustery anger in the delivery, thereâ€™s a poetic intelligence to the lyrics, â€œWeâ€™ve been lulled to sleep by pretty dreams/weâ€™re in love with things we donâ€™t need.â€ Is the song a commentary on modern materialism or is it an investigation into oneâ€™s own desires? Philadelphia has long has an understated purposeful, cleverly ambiguity to its bands (see Ink and Dagger, F.O.D., and many others) and that rises its head here.

But, while â€œBeautiful & Miserableâ€ seems reflected from bands like Converge, â€œWith Stolen Wordsâ€ finds the band backing off the aggression and easing into emo territory (think Embrace, notâ€¦ wellâ€¦ you knowâ€¦) with its twinkling backdrop. The band keeps the edge on their music but comes from a more vulnerable place lyrically and texturally. Mixing the harder and more reflective sides is a risky maneuver, but because the band can link the sides together with a certain thematic tie, it works in ways that few bands can pull off.

The Old Colors Are Dead is noisy release- the band seems focuses on technicality as much as impact. The result is an intricate album that seems to zig when you expect it to zag and often has as much going on in the background as the foreground, which you only notice if you make it a point to notice. Being that their debut release seems so fully formed- probably because the band is composed of veterans- it will be very interesting to see how this inter-woven mass evolves.