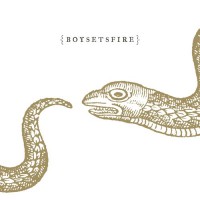 BoySetsFire album isn't a terrible album. Â It's certainly middle of the road. Â But, this isn't just any generic band - this is Boy Sets Fire. Â This is the band that released amazing albums like The Day the Sun Went Out and even their foray onto Victory Records' debut After the Eulogy. Â

Â Even on their later releases, BSF tended to have at least one or two songs that really stood-out and made the remainder of the album something one could pretend to like. Â The closest this album comes to that feeling is either "One Match" which gets ruined by a whoa-whoa anthem. Â "Heaven Knows" is possibly a little bit better, but the delay/echo vocal effect that Nathan uses ruins it. Â

Other than those two songs, the other eleven albums run the gamut from ballad-y "we're trying to recreate our breakthrough emo sound from the mid-90's" to "we're angry...growl." Â

Maybe part of the disappointment was the optimism for this album. Then they released The Misery Index , it was a bit disappointing. Â By that point, they were on the downswing, but it was more of a let down than was expected. Â With hindsight, songs like "(10) and Counting" really showed the album was underrated. Â Then, years later, they got back together and released While a Nation Sleeps... , another even more mediocre album. Â Now, two years later, the band stumbles again. Â Some artists lose their spark and maybe that's what happened to Boy Sets Fire. Â

All that being said, Nathan's vocals are still on point, at least when they switch between singing and screaming. Â And thankfully there's enough of the two to make this not horrible. Â But, listening to this album makes one miss The Casting Out that much more. Â

Into It. Over It.: Standards