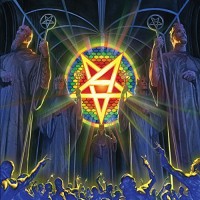 Anthrax and Joey Belladonna had a lot to prove with For All Kings. As good and critically acclaimed as 2011â€™s Worship Music was, it was originally written with a different singer (Dan Nelson). Belladonna only swooped in at the last minute to record the vocal tracks. 2013â€™s cover album Anthems was a nice diversion, but really only served to prove that Belladonna would have been a good replacement for Steve Perry in Journey. In a lot of ways, For All Kings is the true follow up to the last Joey Belladonna/Scott Ian/Charlie Benante/Frank Bello collaboration, 1990â€™s Persistence of Time. As good as the John Bush years were, many fans had long hoped for the permanent return of this classic (minus Dan Spitz) lineup. This was the version of Anthrax that got so many of us into the band during the golden era (late 80â€™s) of thrash.

Belladonna has always had one of the best voices in thrash, a genre that usually favors lyrical content over vocal prowess. On For All Kings, he really gets a chance to shine. It follows a similar formula to Worship Music, but incorporates even more of the classic style of metal where Belladonna soars. Opener, â€œYou Gotta Believeâ€, comes after a drumroll and epic intro, and is a good example of this. Itâ€™s mostly jagged thrash, but has an extended melodic breakdown in the middle. â€œMonster at the Endâ€ is one of the albumâ€™s more intriguing songs. When my son was little (he can drive now and towers over me), one of his favorite books was The Monster at the End of this Book. Is it possible that an Anthrax song was inspired by a children's story featuring lovable, furry old Grover? The title track starts with a stark Belladonna vocal line before it gets down to business. The song has an arrogant swagger that proclaims the band kings, but is also a cautionary tale that acknowledges that no reign lasts forever.

â€œBreathing Lightningâ€ was the first single, and is also one of the albumâ€™s most ambitious tracks. It has a lullaby-like intro and outro, with ample heaviness sandwiched in between. The most epic song on For All Kings is the nearly 8 minute â€œBlood Eagle Wingsâ€. Itâ€™s a great song with a great melody, and really wallows in the bandâ€™s Judas Priest/Iron Maiden influences. It also has a twisted single note riff thatâ€™s hard to wrap your head around. â€œSuzerainâ€ is either a thrash love song or a thrash break-up song. Itâ€™s no power ballad, thatâ€™s for sure. Itâ€™s choppy and super heavy and Belladonnaâ€™s voice has a desperate, yearning quality. Those craving the classic sound of 1987â€™s Among the Living will probably find that â€œEvil Twinâ€ and â€œDefend/Avengeâ€ hit the spot. Fans of singer John Bush and 1993â€™s Sound of White Noise might prefer â€œAll of them Thievesâ€ and â€œThis Battle Chose Usâ€. On album closer, â€œZero Toleranceâ€, the vocals follow the guitar line to create a swirling carnival effect, despite the fact that it has some harsh, biting lyrics. â€œZero tolerance for extremism, in the name of religion/Zero tolerance for racial hate, the police state/Zero tolerance for politicians, on the left and the right/Zero tolerance for killing children.â€

Anthrax took their sweet time to make For All Kings, and it shows. Every song is extremely well crafted. This is even more impressive when you realize that Anthrax is clearly a band still making albums for the CD era. The 11 songs (plus two short, unlisted instrumental tracks) com in at 59 minutes. If thereâ€™s an upside to the decline in physical music sales, itâ€™s that some bands have really upped the quality of their packaging. Anthrax has fully embraced the pentagram, and both the CD and LP version of this are very nicely done. Iâ€™ve been an unrepentant fan of thrash in general, and the big four in particular, for a very long time now. The last couple of years have been kind of vindicating for me. Last year Slayer gave us the relentlessly pummeling Repentless. Earlier this year Megadeth unleashed the razor sharp Dystopia. Now Anthrax drops this little piece of headbanging heaven. Thereâ€™s even reason to believe weâ€™re going to get a new Metallica album later this year (for better or worse). Three decades after Master of Puppets forced thrash into the mainstream consciousness, Anthrax and many of their contemporaries are still making music that matters.