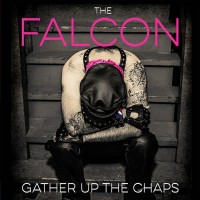 If The Lawrence Arms are the musical equivalent of raising a toast with your (admittedly aging) friends in your favorite bar, then the Falcon are the equivalent of shooting heroin alone in dark alley. But, ya know, with a sense of humor. It hasnâ€™t always been that way, either. On 2006â€™s Unicornography, The Falcon still felt a bit like a goofy off-shoot of The Lawrence Arms, or at least a place Brendan Kelly could stash all those ideas that werenâ€™t quite in line with the trioâ€™s heartfelt punk esthetic. Ska up-strokes, western ditties, crude humor and the like. I loved that album, but letâ€™s face it: â€œLa-Z-Boy 500â€ wouldnâ€™t sound much out of place on Cocktails and Dreams. In the years since, the Lawrence Arms have evolved a bit with age, but theyâ€™re not too far from where they were before The Falcon. The real shift lies in Kellyâ€™s solo work on the Wandering Birds record. His exploration of evil and crime on Iâ€™d Rather Die Than Live Forever is the most obvious stepping-stone to Gather Up The Chaps. The 2013 record really opened up the floodgates for his dark lyrical ambitions, and the Falcon of 2016 is a different bird entirely.

Reborn out of the Red Scare ten-year anniversary show, The Falconâ€™s Gather Up The Chaps seems intent on making a statement: this is not some half-assed â€œsuper groupâ€ collection of songs. Grounded in a darkened version of the same chord-structures these four have used for eternity, the album feels like a lifetimeâ€™s worth of experiences on abandoned Chicago railroad tracks. Drug abuse, crime and seedy streets, caustic shit talking, and the darkest parts of pop culture and society are the mark of the joke and the heart of the album. As on his work with the Wandering Birds, Kelly now seems most comfortable when he inhabits first-person narratives of the dregs of humanity. On â€œSergioâ€™s Hereâ€, heâ€™s a relapsed addict, badgering his girlfriend to get money ready â€˜cause the dealerâ€™s on his way. On the particularly memorable intro of â€œHasselhoff Cheeseburgerâ€, Kelly sings: â€œGrapple down the scaffolding like Hasselhoff dismantling the greasy mantle pieces and the cheesiest diseases/ Mangling a cheeseburger while rolling in your feces/ I'm a hairy, old Khaleesi, draggin' ass, draggin' on.â€ Gather up the Chaps, though gloomy in its focus and fodder, ultimately finds the humor and humanity in the chunks of the world that music tends to ignore. A clear aside is found in the track â€œThe Fighter, The Rube, The Assholeâ€, which takes aim at the â€œtroubledâ€ rockstar clichÃ©. In the end, Kelly and co. call bullshit on what the music industry spoon-feeds us as gritty truth; real truth and humankind can be found closer to the margins of society and not on the exalted stage.

Throughout the record's twelve tracks, you get the sense that though Kelly is the ringleader, everyoneâ€™s in on the fun. Whether itâ€™s unintentional background laughter at the â€œcock and ballsâ€ line or Kelly interrupting a song to ask Dave Hause â€œDid you just say hipster ass?â€, all of the members have a permanent smirk for the duration of the album. That said, it almost feels like a minor misstep not letting the bandâ€™s other punk superstars take the lead more often. Dan Andriano and Dave Haus each brought a track to the studio, and as the title â€œIf Dave Did Itâ€ suggests, both are the songwritersâ€™ take on what they think The Falcon is supposed to sound like. Before Kelly hijacks the song, Andrianoâ€™s â€œYou Dumb Dildosâ€ puts to shame much of Alkaline Trioâ€™s output from the last decade, and â€œIf Dave Did Itâ€ is easily Hauseâ€™s hardest-edged song to date. Guys, if youâ€™re reading thisâ€¦ Iâ€™d pay big money for an Andriano and Hause-led EP or two.

In interviews, the band has pretty strongly suggested that this was meant to be a dirty, off-the-rails rock and roll record. Kelly claims he made Hause throw out nearly all of the guitar leads he wrote for the songs because they were just too well done for what was ultimately supposed to be a shit-show, messy banger of a record. Despite their best intentions, Gather Up The Chaps still is polished enough for the average Andriano fan to endure and it's still a fun listen. Itâ€™s got big choruses, developed song structure and catchy-as-hell melodies. But it pushes the boundaries of grittiness in its lyrical focus and a subtle shift in musical mood. Look--- I know orgcore is an easy target for a lot of people around here. The stereotypes about the subgenre are stereotypes for a reason. But this record shows that four of orgcoreâ€™s most championed musicians can come together and create something that truly defies those subgenre conventions. Maybe this still won't be your cup of tea, but you've gotta admit that Gather Up the Chaps is a far cry from â€œsongs about whiskey and friendshipâ€.Â