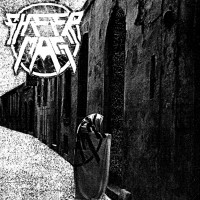 Sheer Mag have released their new 7-inch single and it's an impressive addition.

The sound combines the vocals of the Yeah Yeah Yeahs and the music of a 90s Brit pop band with a dash of late 90s garage punk. It's round and vaguely distorted and has a hell of a lot of charm to it.

â€œCanâ€™t Stop Fightingâ€ is a fun start to the single, but the production harms the track- and this problem carries on throughout the release. The raw and distorted vocals, however badass as they sound, rob the words of their impact. It's one thing to have raw, honest production. But, when that style actual harms the content of the music itself, it may be time to re-think the philosophy.

The second song â€œWorth The Tearsâ€ has a very 70s beach feel to it. It's a perfect song to listen to at night next to the sea sitting next to a fire. The production on this is the same, but due to the more chilled out nature of the song, the lyrics were much easier it hear and to be frank, itâ€™s a beautiful song. Frustrated love you feel for someone else is a timeless theme that never seems to wear out, so this song is striking.

No doubt, the EP is enjoyable. The songs are fun, energetic and raw. But the emotional and sonic impact of the release is little tainted with the production on the vocals. The record does have a very 70s rock and roll/punk feel to it, but Iâ€™d like to be able to hear what vocalist Tina is saying a little more.