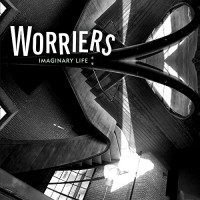 Worrier's new record, Imaginary Life, seems to have a certain kinship with the fundamental building blocks of Against Me!. But that's not much of a surprise when the album was produced by Laura Jane Grace of Against Me!.

Like many Against Me! songs, the record is mid-tempo, focuses on rhythm, and maybe has a new wave flourish or two. But, there is a definite dedication to punk rock's attitude. The record even ventures out into experimental territory every so often, but not so much that it detracts from the albums core strengths.

Lead vocalist Lauren Measure has a strong distinct voice; it's very fitting with the music. She really adds life to the tracks- not that the songs are dull, but the songs seem to be built around Lauren, rather than her simply singing over top of them. Â In some ways, the album is chaotic. There are a lot of random guitar and piano riffs that are sprinkled throughout these songs which keeps things interesting.

There is an overall "blue" themed tone throughout this album. It sounds like lyrically these songs are based off personal experiences and how she interprets them. Coming up as a feminist band in Brooklyn must have been tough at times, and probably still is, and that shows in the writing. A lot of songs have the same message of personal struggles and wanting to isolate yourself from the world--a sentiment most of us can relate to--but it's done in a way that's not repetitive or tiring to listen to.Â

This is a very cohesive album that comes together quite nicely. The constant theme of the record repeats and grows throughout the track list, while staying true to a core message. Basically if you like 1 track you'll dig them all.

Shannon and the Clams: Gone by the Dawn