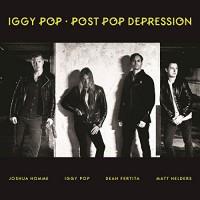 A few people have noted how strange it is that of the Trinity of Bowie, Reed and Iggy Pop, Pop has outlived the others -- the most spontaneous and purely self-destructive of all frontmen is still alive and well, if marked with scars and remnants of wounds. But then the former James Osterberg has always been a survivor, a fighter. The cover of A Million In Prizes showed Iggy with his hands wrapped in dirty tape, ready for a match, and it made complete sense. And it's logical too that if Pop is retiring (possibly) that he'd come out with his best album in years, the collaboration with Josh Homme, Post Pop Depression, a cool, sleazy rock record that's unmistakably a group project but also perfectly an Iggy album: sexy, nasty and darkly funny.


From the opening, loosely Middle Eastern feeling of the guitar and synth lines on "Break Into Your Heart," Post Pop Depression sets the stage: Homme's and Dean Fertiti's playing throughout has the feel of Homme's spacey, rhythmic production for the Arctic Monkeys, but just a little nastier and weirder, perfect for Iggy's rough, still powerful crooning. His voice has aged but it gives his proletariat trailer trash lyrics a natural authority and power. The music here is dreamy and menacing, the sound with enough room for a fuzzy churning sound and the absurd orchestra breakdown on "Sunday."


The best song here though is undoubtedly "Gardenia" -- like all of Pop's love songs, it's a sincere ode from a dirty pervert, who claims that "All I want to do is tell Gardenia/what to do tonight" under a exhilarating, danceable chorus, and it's the record's greatest height naturally coming from "a cheapo motel/on the highway to hell." But still, nothing here is filler except for "Vulture," a song with some great Pop vocals but that feels a little empty compared to the rest. Post Pop Depression feels like it was recorded in the desert, an alternate soundtrack to Lost Highway in it's obsession and murky cruelty.


And if Pop is done after this, it's a very good way to go out. The closing track "Paraguay" is Iggy's middle finger of resignation from the lunacy and glorious failure of his career, and his dismissal of the rational thinking that would have made his life so damn boring. â€œI'm going where sore losers go/Though it's a dream, it's not alive/And I won't stop to say goodbye." And as the record ends, I thought back to where "American Valhalla"'s chiming "China Girl" xylophone sound and riffs disappear, and Iggy Pop intones with the terrifying voice of a Gnostic prophet "I've nothing but my name." And considering what he made from nothing, wrestling with the devil in broken glass, he never needed much else.