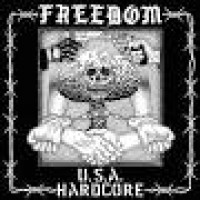 Freedom are a traditional straight-edge hardcore band from Detroit Michigan; from what I understand they started in 2014 and have gained a lot of support in that short time, playing many of North America's big hardcore festivals including This Is Hardcore in Philadelphia, and United Blood in Richmond. Freedom are what some might call a current hype band, they are loved and jocked by hardcore fans worldwide, this made me extremely curious to check out their new full length U.S.A. Hardcore.

With a title like U.S.A. Hardcore and all of the hype I had observed surrounding this band, I went into this record with some reasonably high expectations, those high expectations unfortunately led me to disappointment. U.S.A. Hardcore is a stripped down, no frills, traditional hardcore release. The band gives off a lot of old school New York vibes, showing off influences such as Madball and Agnostic Front, with a vocal style that reminds me of a more grating version of Death Threat. The musicianship on U.S.A. Hardcore is competent, the production gives me a nostalgic feeling that reminds me of some of my favorite old releases, and the songs are short, sweet and to the point (the longest song clocking in at just over two and a half minutes). All of the ingredients for a perfect hardcore record are present here, but at the end of the day U.S.A. Hardcore left me feeling bored.

I can appreciate what Freedom are going for here, this is a throwback to traditional hardcore in the vein of Set It Off-era Madball. In a way it reminds me of why I liked hardcore in the first place, simple, angry music that voices the frustration we all face. For a new kid going to a show I can understand why this band is easy to get into, mosh mutants and show goers could easily get down with the two-step inducing riffs that Freedom produce. I feel like if I had the opportunity to see Freedom live, my enjoyment of the record might increase, but I canâ€™t escape the feeling that this is paint by numbers hardcore.

U.S.A. Hardcore is a record that I would recommend to individuals who truly love everything hardcore, for those not intimately versed in hardcore culture, this record will likely fall to the wayside. Many of the tracks on U.S.A. hardcore blended together for me, "Slam II" however was the exception with a pretty infectious mosh inducing two step throughout most of the song. Freedom are a band with potential, and what seems to be a strong work ethic; Iâ€™d like to give them the benefit of the doubt and hope that they find themselves and create more of their own sound in future releases. If they donâ€™t, Freedom may go from everyoneâ€™s favorite current hardcore band, to forgotten in a few short years.Â